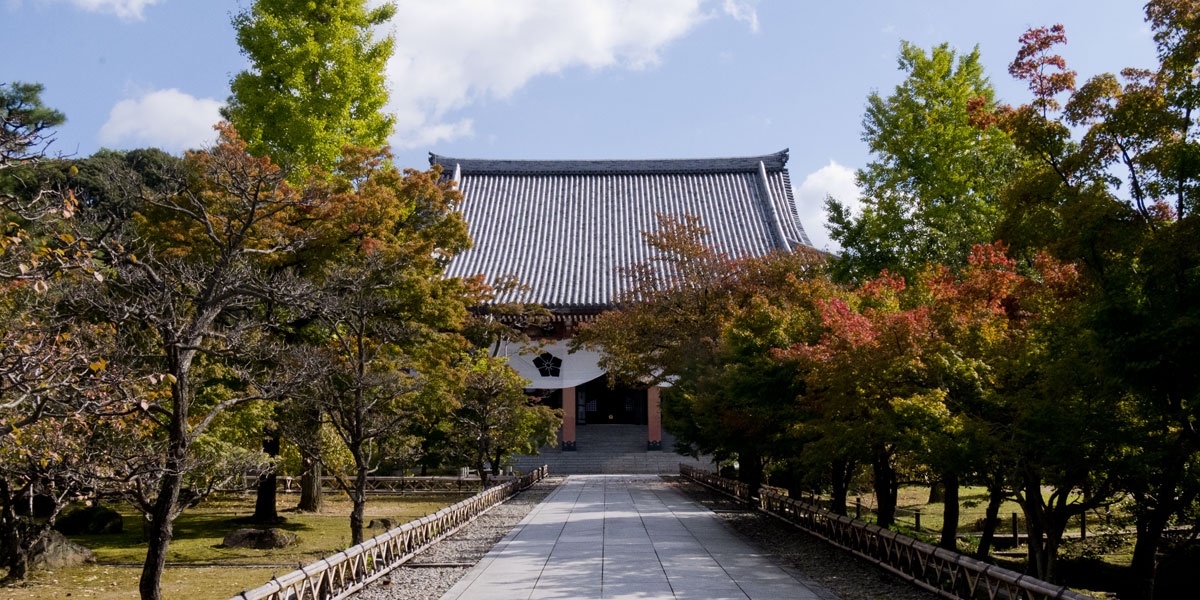 Beautiful and well-maintained Japanese Maple trees in the huge precinct

One of the Most Beautiful Spots in Higashiyama Ward

Chishaku-in is one of my most favorite temples in Kyoto. This is a beautiful temple with lots to see there, whereas very few travel guidebooks feature this temple as one of the must-visit places. In a sense, it is a hidden gem having a well-maintained precinct which provides visitors with out-of-this-world experience. I think the temple has not proactively publicized itself as a popular sightseeing spot, and thanks to that, there are not so many visitors even in high seasons.

Located in Higashiyama Ward, Chishaku-in is the head temple for Chisan school of Shingon Buddhist sect and it has 3,000 branch temples throughout Japan. It is considered the central learning and practicing hall for as many as 300,000 worshipers.

Chishaku-in was originally one of the sub-temples in Mt. Koya (Wakayama prefecture), where Kobo-Daishi founded Shingon Buddhism, but it was moved to Mt. Negoro where Shingon Buddhism reached the peak of its propagation. There were about 6,000 learning priests and their 3,000 houses in the area. Hideyoshi Toyotomi, the ruler of Japan at the time, felt anxiety about the increasing power of the temple and finally they confronted each other. In 1585, the army of Hideyoshi set fire to the temple and houses in Mt. Negoro and all the buildings were burnt out. The head priest of the temple, Bishop Genyu, escaped Mr. Negoro with his apprentices to Mr. Koya and went under cover. But In 1598 when Hideyoshi died, Genyu came out of the mountain and moved to Higashiyma area in Kyoto to revitalize Chisan school.

In 1601, when Ieyasu Tokugawa became the ruler of Japan, Genyu was granted a part of the precinct of Toyokuni Shrine, where Chishaku-in was eventually rebuilt in Kyoto. And after a while, the adjacent temple called “Shoun-ji” was granted to Genyu by which he successfully expanded Chishaku-in to the current scale. Shoun-ji Temple was built by Hideyoshi to memorialize the spirit of his beloved son, Tsurumaru who passed away when he was only 3 years old. It was Hideyoshi who sieged Mt. Negoro and burnt out Chishaku-in and it was Shoun-ji, a Hideyoshi's temple, which was later taken over by revived Chishaku-in – such an ironic transition of the history. I love the Japanese Maple trees in the temple – beautiful in autumn with the leaves turning scarlet. Also, the temple has really a beautiful Japanese garden by the lecture hall which was used to be a part of Shoun-ji Temple. The garden expresses the landscapes of China. It is just breath-taking.

Lodging Available for Worshipers and Visitors

There is a hotel operated by Chishaku-in temple. I have never stayed there, but if you stay, you can experience being a Buddhist monk. You have to wake up early in the morning and are supposed to do religious services and join the holly fire mass preceded by breakfast. 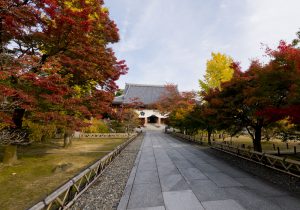 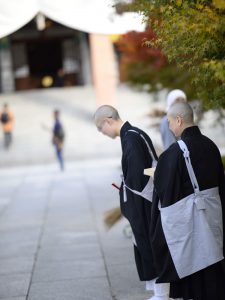 Buddhist priest praying to statue of Bishop "Genyu" as he passes by it. 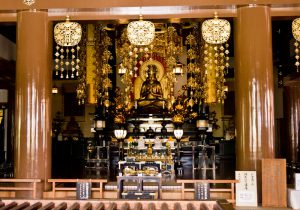 "Dainichi-Nyorai" Buddha - the principal image of the temple, enshrined in the Main Hall 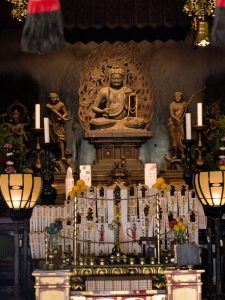 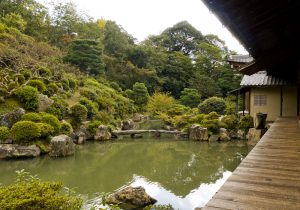 Beautiful Japanese garden in the Lecture Hall area, which represents a landscape of China. This area used to be "Shoun-ji" Temple built by Hideyoshi. 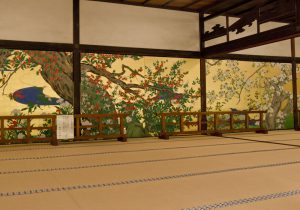 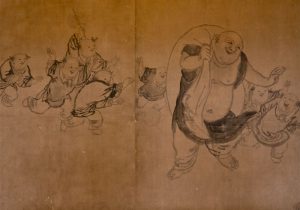 Painting of "Hotei", one of the seven lucky gods 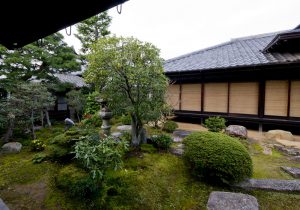 Inner garden in the Lecture Hall 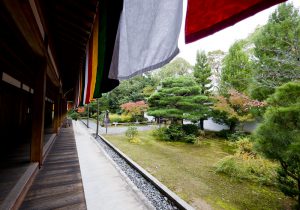