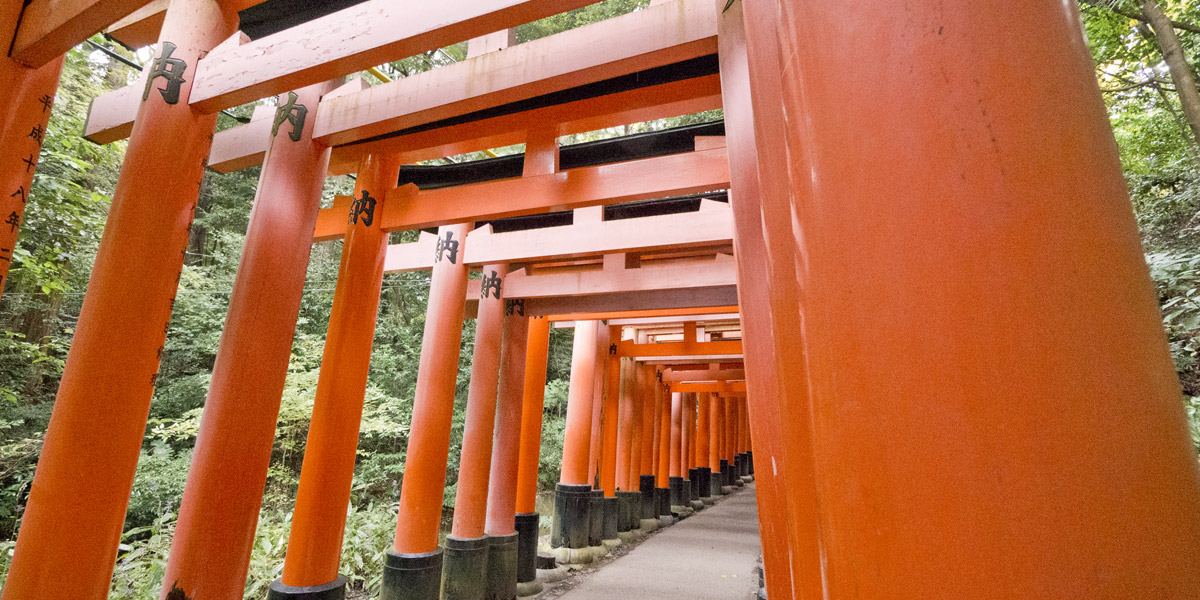 The most popular sightseeing spot in Kyoto Fushimi-Inari Taisha is by far the most popular place to visit in Kyoto. Huge number of people visit there everyday and go up the mountain through "Senbon Torii" archway trail. "Senbon Torii" means "Thousand Torii Gates" in English. But in reality, more than 10,000 Torii Gates are in the trail from the base of the mountain all the way up to the top. The trail spans almost 2.5 miles and it takes about one hour to go up the top. Torii Gates are the ones donated by individuals and merchants with wishes to be successful in business. You can see the names of the donors on the columns. There are many places of interest in the trail such as smaller shrines, observation decks overlooking Kyoto from the south, etc. Also, there are Japanese style cafe's in several places, so you can take a break anytime you want. I think the majority of the people walking up the mountain give up in middle of the trail, and turn back. In my case, I usually give up at "Yotsu-Tsuji" Corner where the final trail to the top of the mountain begins. That is where most of the people take breaks and go back down. The view from the observation deck there is spectacular.

This is the usual scene - heavily crowded with tourists.

The biggest problem with Fushimi-Inari is that Torii Gate trail is ALWAYS heavily crowded with people. It is like going up the endless stairs in rush hour in a busy train station. So, I strongly suggest that you go there early in the morning, when not so many people are in the trail.

A pair of Fox statues are the symbol of Inari Shrines There are as many as 30,000 Inari shrines throughout Japan, and Fushimi-Inari is the grand head shrine of all of them. Main shrine stands on the base ground of the mountain, and the principal God ("Inari Ookami") and 4 other associated Gods are enshrined there. Inari Ookami is the God for bumper crops, prosperous business and family well-being. When you visit Fushimi-Inari, you first cleanse your hands at purification water trough and pray to the Gods standing still in front of the main shrine. After that, you proceed to Senbon Torii Gate trail to go up the mountain. Once you step into the trail with thousands of Torii Gates painted with vermillion color, you will feel like you are in another world. Torii Gate is the separator of the world we live and the world of Gods. Statue of Fox - the messenger of God Inari Ookami

When you visit Fushimi-Inari (and all the other Inari shrines), you will see statues of fox. In Shinto, fox is considered the messenger of God Inari Ookami, so a pair of fox statues always sit in front of Inari shrines. People praying to Gods at Inari shrines for something in mind usually bring deep-fried Tofu and Sake, and offer them to the shrine. Deep-fried Tofu is Fox's favorite food.

At Fushimi-Inari, you can also see BBQed Sparrow skewers sold at the street stalls near the main shrine. Again, enshrined is the God of bumper crops to which Sparrows are natural enemies. So, people were catching Sparrows and BBQed them to eat. Nowadays, very few people do so, but as a tradition Sparrow skewers are still sold at Fushimi-Inari. Try one of them. It is tasty.

When Heijo-kyo (a part of current Nara) was still the capital of Japan, the area of current Kyoto was called Yamashiro-no-Kuni (= Yamashiro Province). According to "Fudoki" (records of culture and geography) compiled under the order of Emperor Genmei (661 - 721), there was a greedy guy called "Hata-no-Irogu" in Yamashiro Province who belonged to Hata clan. One day, he shot a bow to a rice cake as the target. Surprisingly, the rice cake hit by the bow transfigured itself to a swan and flew away. The swan landed on top of a mountain where rice started to grow. On the other hand, Hata clan was losing its power. So, Hata-no-Irogu built a small shrine near the rice field to atone for his greedy wrongdoing. After a while, the mountain began to be called Mt. Inari (the word "Inari" implies "Rice grows"). That was the origin of Inari shrine. Map of Mt. Inari - the sacred mountain where Gods live.

Later in 711, there was an imperial order to build three shrines in Mt. Inari enshrining God Inari Ookami and two other associated Gods. A descendant of Hata clan, Iroko-no-Hata-no-Kimi, constructed the shrines. However, these shrines were burnt down in fire in 1468 during Onin Civil War (1467 - 1477). And in 1499 a larger shrine was built in the foot of Mt. Inari and God Inari Ookami and the other two Gods were enshrined in it. That's the current main shrine of Fushimi-Inari, with two other Gods newly added (five Gods in total). The shrine celebrated the 1300th anniversary in 2011. In middle of Senbon Torii Gate trail, there is a spot where two round stones are placed on top of stone lanterns. These stones are called "Omo-Karu Ishi" stones, meaning "Heavy-or-Light" stones. In front of either one of these stones, people pray for something in mind, and they lift the stone. If they feel the stone is lighter than they thought, then the wish will come true. On the other hand, the wish may not come true if the stone is heavier than they thought. Try praying for something and lift the stone.