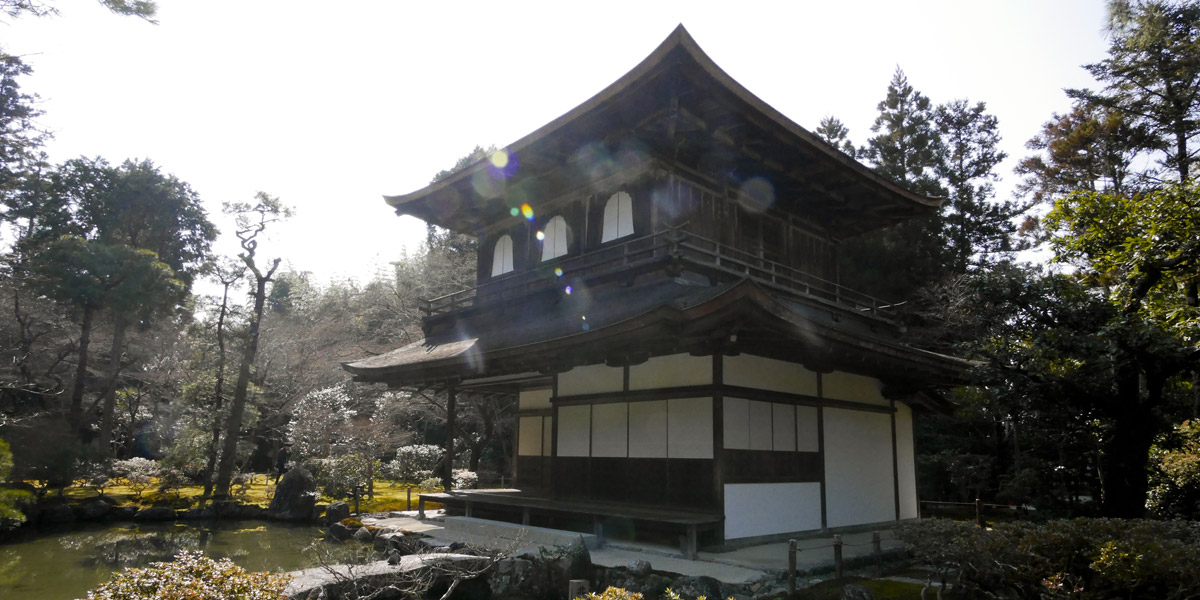 "Silver Pavilion" does not look Silver Actually, the name Silver Pavilion was given to the temple later in Edo Period. Since Yoshimasa was one of the grand sons of Yoshimitsu Ashikaga (the 3rd Shogun) who built Golden Pavlion, people wanted to associate Yoshimasa's temple with it, and started calling it Silver Pavilion. Yoshimasa's government, when he assumed the position of Shogun, did not go well due to his lack of leadership and too much reliance to the others. And due to that, two leading feudal lords at the time broke apart into enemies to each other, causing the nation-wide civil war (Onin War) - I will talk about the this later in this article. Although he failed to manage the government, however, he was really successful in developing Japanese art and culture in his retired villa (= current Ginkaku-ji Temple). Lots of artists were grown in various fields including architecture, flower arrangement, tea ceremony, gardening, etc., and the overall culture evolved during that period of time was called "Higashiyama Culture" (East-Mountain Culture). The garden in Ginkaku-ji Temple is one of the most beautiful gardens in Kyoto, representing it. I like this temple because the Silver Pavilion has been preserved as it originally was, unlike Golden Pavilion which was restored just recently (1955). Also, I like the white sand arts in the temple, namely "Kogetsu-dai" and "Ginsha-dan". These represent a mountain besides West Lake in China and waving water of the lake.

One negative side of this temple (for me) is that it is a highly popular sightseeing spot. There are lots of visitors every day and you can not even stop at a spot where you want to linger for a while. My suggestion is that you go there early in the morning to avoid crowds of people.

In early Heian Period (794 - 1185), a temple called "Jodo-ji" was founded in the same place where Silver Pavilion currently stands. It was a temple for priests of Tendai Buddhism sect. In 1443, Yoshinori Ashikaga (the 6th Shogun) had his son (Yoshimi), enter the Buddhist priesthood and he became the head priest of Jodo-ji Temple. Meanwhile, Yoshimasa (elder brother of Yoshimi) was appointed as the 8th Shogun in 1449. Unfortunately, though, he was not really passionate in managing the government, and was looking forward to the birth of his heir. But his wife, Tomiko Hino, was not blessed with boys. So, in 1464, Yoshimasa finally decided to have Yoshimi return to the secular life from his priesthood to be his successor. But soon after that, a boy was born between Yoshimasa and Tomiko. The boy was named Yoshihisa. Tomiko thought her son would be more appropriate taking over the position of Shogun rather than Yoshimi. Then she approached Sozen Yamana, one of the provincial lords, to ask him to do something to stop the original plan of having Yoshimi become her husband's successor. Having noticed the suspicious move, the guardian of Yoshimi, Katsumoto Hosokawa (a Shogunal Deputy), started confronting with Sozen Yamana. They broke up into enemies, and that triggered the 10-year long civil war "Onin War", involving other feudal loads. And at the end, it was Yoshihisa who became the 9th Shogun, not Yoshimi...

During Onin War, Jodo-ji Temple was completely destroyed. After the war was over, Yoshimasa started building his retired villa in the area where Jodo-ji Temple was standing. And in 1483, he handed over all his responsibilities to his son, Yoshihisa, and moved in the villa to pursue his cultural activities.

In 1489, Yoshimasa ordered to build Kannon-den Hall (current Silver Pavilion) in the villa but he was unable to see it - he died before it was completed.

According to Yoshimasa's will, his villa began serving as Zen Buddhist temple and renamed to "Jisho-ji" Temple which is the official name of Ginkaku-ji Temple.

Ginkaku-ji Temple was registered as a UNESCO World Heritage in 1994. 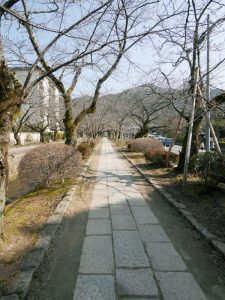 Philosophers Walk. Narrow alley along the stream towards Ginkaku-ji Temple 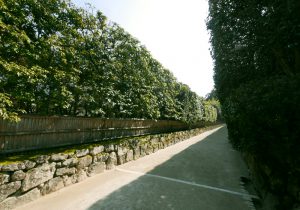 Straight path to the inner gate of the temple - beautifully maintained 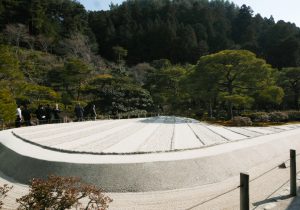 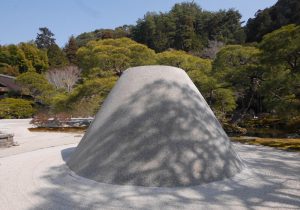 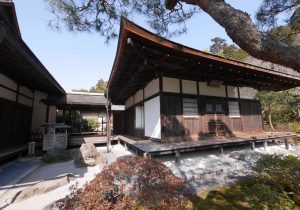 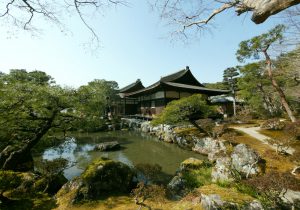 Beautiful garden in Ginkaku-ji Temple. This is a typical Japanese garden inspired by "Higashiyama Culture".