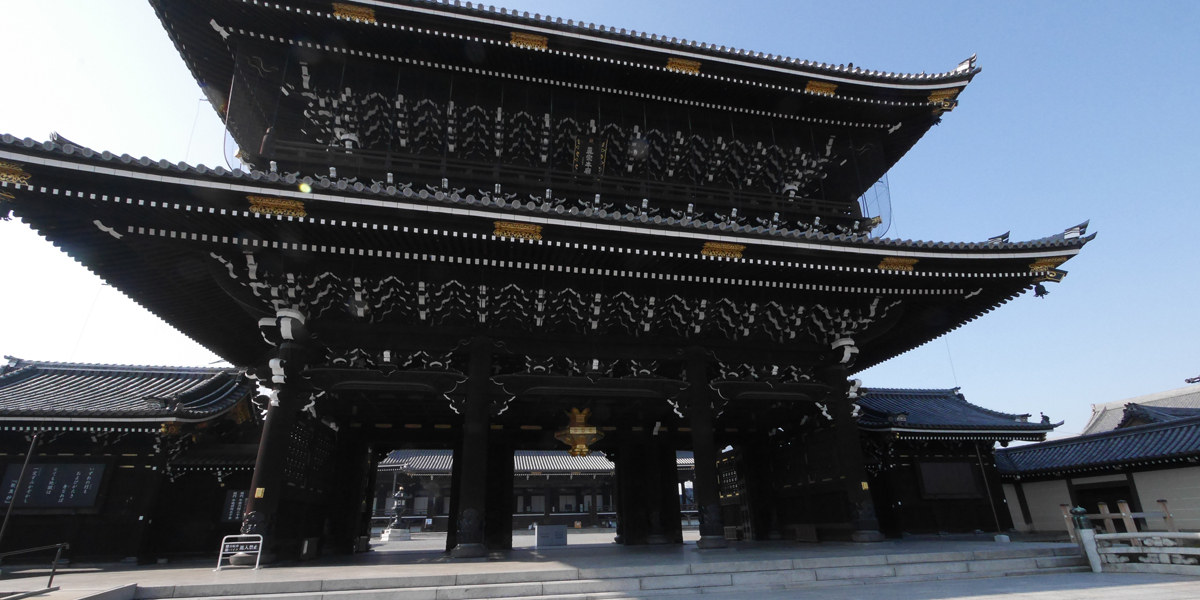 Tranquil Moment in a Beautiful Precinct I really like this temple. Although it is a gorgeous temple with huge precinct, it is not really crowded with visitors. I live pretty close to the temple, and I visit there very often, but I rarely see crowds of people. Very quiet and peaceful.

Higashi-Honganji Temple (East Honganji) was founded in 1602 by Saint Kyonyo in the current location - only 1/2 mile away from its sister temple "Nishi-Honganji" (West Honganji) which was built by his father Saint Kennyo in 1591. These two sister temples get along well together nowadays, but not in the past. They used to be against each other. Saint Kyonyo once succeeded Nishi-Honganji Temple when his father died, but soon after that, he was demoted and his younger brother, Junnyo, took over the head priest's position. Kyonyo was not happy at all, but he kept staying low profile behind the stage. When the ruler at the time, Hideyoshi Toyotomi, who supported the idea of replacing the head priest passed away, Kyonyo approached the new ruler, Ieyasu Tokugawa, and asked him to help him build his own temple. Ieyasu, having been aware of the confrontation between the two brothers, granted Kyonyo a ground near Nishi-Honganji Temple and provided resources to build a new temple. Ieyasu was more comfortable having the two brothers keep confronting each other, rather than seeing them reconciled to be powerful enough to go against his Shogunate government. The other thing that you may want to see in Higashi-Honganji temple is the thick rope made from hemp and human hair (226' long and weighs 827lbs). It is exhibited in the corridor between Amidado Hall and Geido Hall. Amidado Hall and Goeido Hall were burnt down by fire four times during Edo Period, and each time these were restored, heavy massive beams had to be pulled and hoisted. The ropes they were using were not robust enough and they often broke. So, many of the female believers at the time donated their long hair and they were braided with hemp strings to make stronger ropes.

For more historical background, visit the article about Nishi-Honganji Temple. 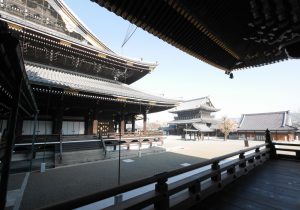 Amidado Hall viewed from the north corridor of Goeido Hall 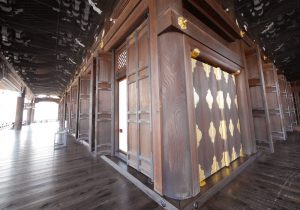 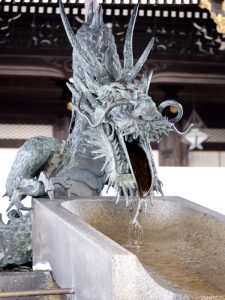 Purification trough with a bronze statue of Dragon expelling water 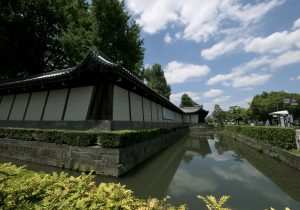 Outer moat of the temple. Many Carps in the water. 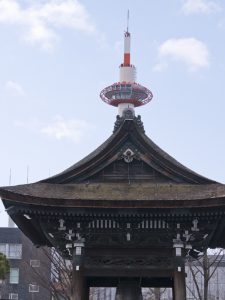 Kyoto Tower rising behind the bell tower of the temple. Kyoto Tower is right in front of JR Kyoto Station - meaning the temple is very close to the station. 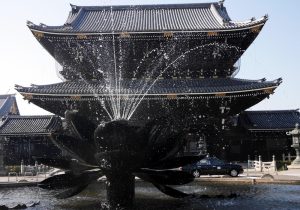 Temple's main gate looked from the other side of Karasuma Street 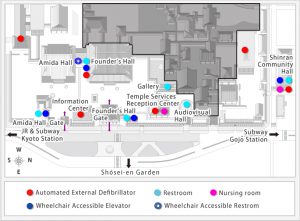