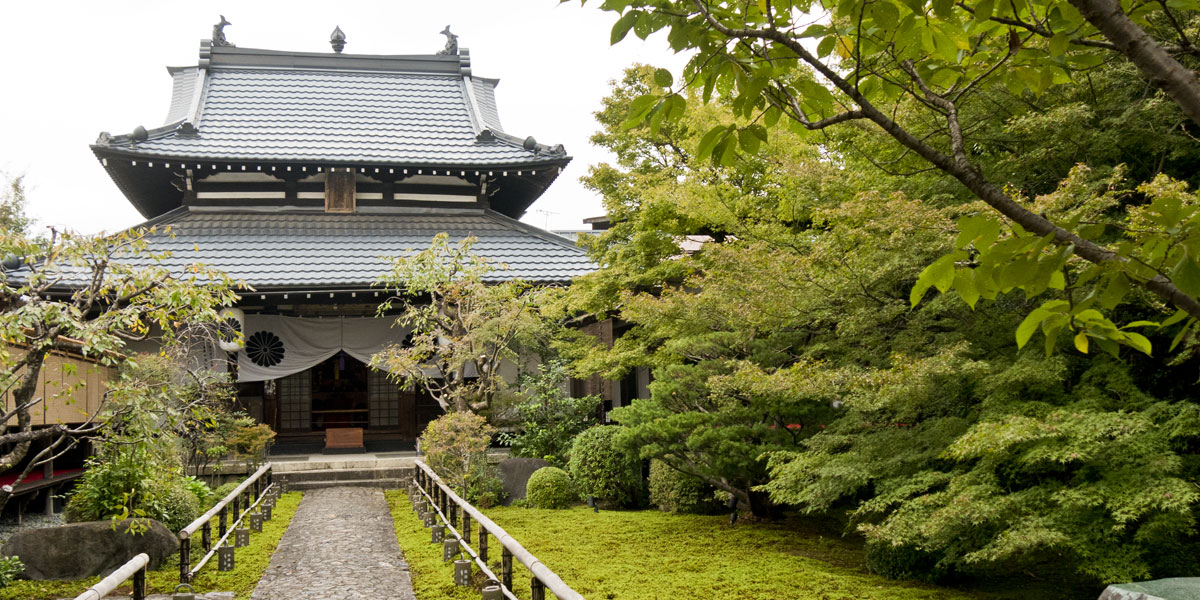 This is one of my most favorite places to visit in Kyoto. Located a bit far away from central Kyoto, I can feel a tranquil moment there. It is not a big touristic place like Kiyomizu-dera Temple or Yasaka Jinja Shrine, but has really interesting factors that the highly popular sightseeing spots do not have. Big temples have small shrines in the precincts from time to time, but it is kinda unusual for such a small temple like this having a shrine in it. 2nd, this temple has a vegan Japanese restaurant offering "Fussa" Cuisine originated in China. 3rd, there is a Bar adjacent to the main temple hall, serving Beers, Whiskeys and some cocktails. Main temple hall. There is a huge dragon drew on the ceiling there.

The property used to be the residence of Duke "Kajii-Joshuuin", a brother of Emperor Gomizunoo in early Edo Period. After the duke passed away, the residence began serving as a Zen temple (temple for Zen meditation practices). Shrine where Chintaku-san is enshrined. It is located near the entrance.

Back in middle of Heian Period (794 - 1185), Emperor Enyu enshrined "Chintaku" in a hidden shrine in Kibune area (northeast of Kyoto) to guard the imperial palace from the evils - northeast direction has been considered the demon's gate. Chintaku was the grand master of "Onmyo-do" (Yin-Yang Exorcism), and he trained "Abe-no-Seimei" who later became the legendary master of Onmyo-do. So, the power of Chintaku was huge and he was expected to get rid of all the evils trying to get into imperial palace. But over the centuries, people's attention to Chintaku had been lost and the shrine where he was enshrined had been kept abandoned. Powerful Chintaku-san sitting in the shrine

In 1671, however, the statue of Chintaku was moved to where Kanga-an Temple is located now (north of imperial palace), and again it resumed the role to guard imperial palace. Kanga-an Temple still is a Zen temple headed by female chief priest,  having been operated over generations. And at the same time it is an Onmyo-do exorcism shrine with the power of Chintaku. Zen temple is open for public at 1:00pm, but the shrine is open after the sun goes down. When visiting the shrine and facing Chintaku, make sure to make only one wish. That wish will most probably come true. But if making multiple wishes, nothing will be fulfilled. That is what I was told by one of the senior priests when I visited there the other day. A plate of Resembled Chestnuts, served at the vegan restaurant

Although the temple (and the shrine) is not big, the garden is well maintained and really beautiful throughout the year. The vegan restaurant has privatized dining rooms which all face the garden. We can enjoy seasonal garden views through the windows, over lunch or dinner. Although each room is Tatami-floored, a table and chairs are furnished. So, we do not have to sit on our knees. Foods are exquisite and nicely presented. When I dined there last time, one of the dishes was a plate of resembled Chestnuts. Prickles were deep-fried green tea noodles, and inside of the shells were sweetened white bean paste. It was served as a dessert at the end of a prix-fixe lunch menu. Very thoughtful and creative dish it was.

I have not had a drink at the Bar yet. Maybe next time... Oh, when I first dined at the vegan restaurant, the senior priest said that once someone visits Kanga-an he or she will come back again, gravitated by the power of Chintaku. I lived in Shizuoka then (250 miles away from Kyoto), so I did not expect visiting there again. But to my surprise, I have been there multiple times since then and eventually moved to Kyoto. 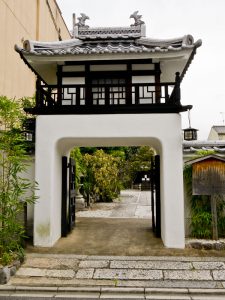 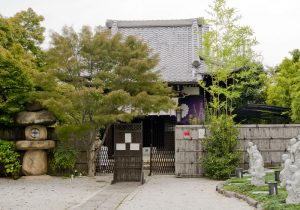 Shrine hall, where Chintaku-Reifujin is enshrined 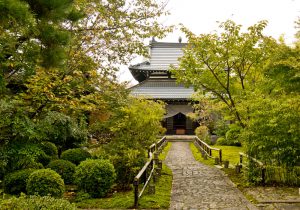 Main temple hall located at the end of the garden 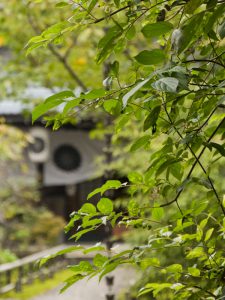 Vegan restaurant facing the garden. The view through the windows is beautiful, especially in the evening when the garden is lit up. 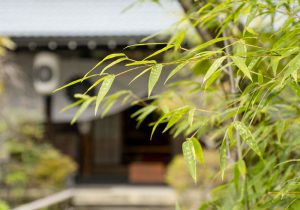 Bamboo trees in the garden