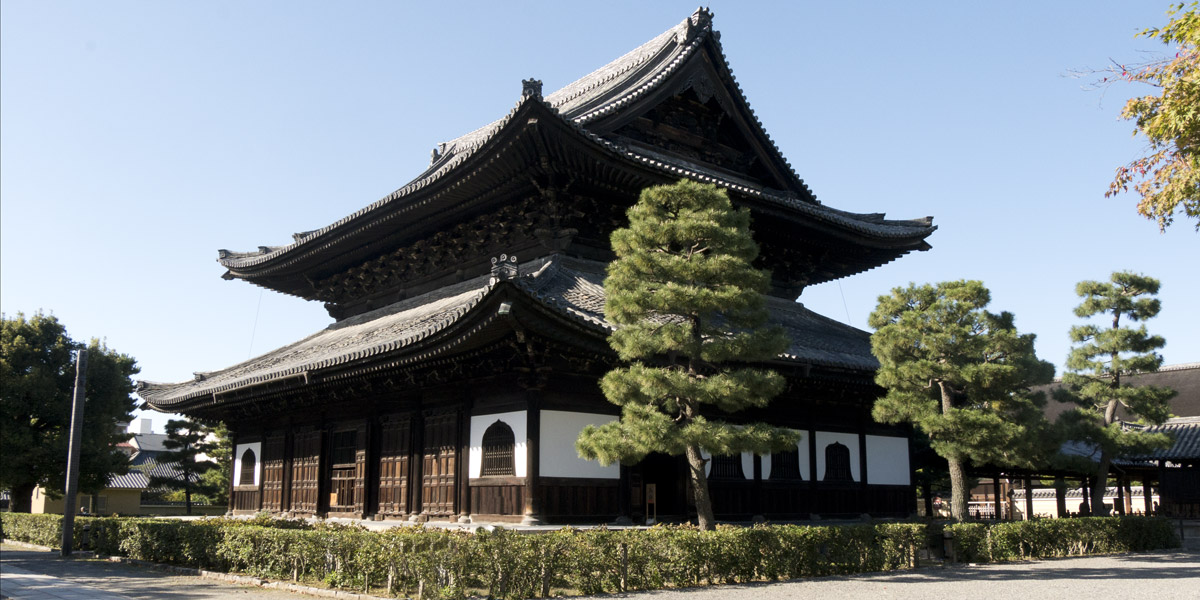 I really like this temple. It is in a prime location in Higashiyama Ward, pretty close to Gion (the most bustling Geisha district) and to the central area of Kyoto. On top of that, this temple is relatively quieter than nearby crowded sightseeing spots like Kiyomizu-dera Temple, Kodai-ji Temple, Yasaka Shrine, etc. The precinct of Kennin-ji Temple is huge and the garden with a pond in the center is really beautiful.

Kennin-ji Temple is ranked the third of the five great Zen temples in Kyoto and is the oldest among them. It is the headquarters of Kennin-ji school of Rinzai Buddhist sect originated in China. The founder was a Japanese Buddhist priest "Yousai" (1141 - 1215) who learned Rinzai Buddhism in China and introduced it into Japan. Yousai, when he was 13 years old, became a monk at Enryaku-ji Temple in Mt. Hiei which was a Tendai Buddhist sect temple. But after mastering the theology of Tendai Buddhism, he found himself getting fed up with corruption of emasculated Enryaku-ji Temple. Coincidentally, Zen based Rinzai Buddhism was prospering in Southern Song (China). Yousai thought incorporation of Zen meditation practice would revitalize Buddhism in Japan, and so he decided to visit China to learn Rinzai Buddhism. He ended up visiting there twice - 1168 and 1187.

When Yousai came back from China, however, he was not allowed to propagate Rinzai Buddhism in Kyoto where Enryaku-ji Temple still predominated religious world. So, he opened his first Zen temple "Shofuku-ji" in Kyushu Island. Later in 1202, he was eventually allowed to introduce Rinzai Buddhism in Kyoto and he opened up Kennin-ji Temple to launch his missionary work. At the beginning, however, Kennin-ji served as a temple for not only Rinzai Buddhist sect, but also Tendai and Shingon sects. That was because Yousai thought it would be safer, as a new comer, to partner with those two existing powerful Buddhist sects, rather than going on his own. It was 1259, when Kennin-ji finally became a pure Zen temple serving only for Rinzai Buddhist sect, at which time a Chinese priest "Doryu" was invited to be the 11th head priest.

All the buildings of Kennin-ji Temple were burnt down in fires during Onin Civil War (1467 - 1577), so original buildings no longer remain. Currently, there are following buildings in the precinct.

"Hojo" Hall (living quarter of the head priest) : Hojo Hall of Kinnin-ji Temple is an important cultural property of Japan. It was originally built in Ankoku-ji Temple in Hiroshima prefecture in 1487, and it was relocated to the current location in 1599 by "Ekei", the head priest of Ankoku-ji. In 1934, Hojo Hall was destroyed by a powerful typhoon called "Muroto" and restored in 1940. In the hall, you can see the sliding panels with a spectacular painting of "Wind God and Thunder God" (national treasure of Japan) by a Japanese painter "Sotatsu Tawaraya". Original panels are exhibited in Kyoto National Museum, but you can still see the digitally processed beautiful replica in Hojo Hall. In Hojo Hall, wooden statue of eleven-faced Kannon Buddhisattva is enshrined as the principal image of worship.

Chokushi-Mon Gate: This is also registered as an important cultural property of Japan. It used to be the entrance gate of the residence of the ruler in late Heian Period, Kiyomori Taira. After Onin Civil War, it was moved to the current location. We can see the marks of arrowheads shot during the war. "Hodo" Lecture Hall: Hodo Lecture Hall also serves as Buddha Hall. It looks like a two story building, but it is a single story structure constructed in 1765. Over the panel-lined ceiling, an image of two dragons is painted with Japanese black ink. It was painted in 2002 by a Japanese painter "Junsaku Koizumi" to commemorate the temple's 800th anniversary. "Sanmon" Triple-Gate: It stands in between Hodo Lecture Hall and the pond. The gate was originally built in Annei-ji Temple in Shizuoka prefecture in late Edo Period. It was moved to Kennin-ji Temple in 1923.

"Honbo" Hall: It used to be the central kitchen of the temple, built in 1814.

"Kaizan-do" Hall: Kaizan-do is a hall to commemorate the founder of the temple (Yousai). It was built in 1884.

The founder ("Yousai") was also a Tea evangelist

BTW, it was Yousai who introduced the tradition of drinking tea from China. Tea drinking was not popular among the people in Japan before then - tea was considered a luxury stuff consumed only by the court-nobles and higher-ranked Buddhist priests. Yousai learned the broader benefits of tea in China - tea helped him keep awake during the Zen meditation practice going for hours, and he knew how good the tea was for his health. Having experienced these benefits, he brought seeds of various tea plants back with him, and tried to familiarize tea drinking habit with people in Japan.

When you visit Kennin-ji Temple, I suggest that you also visit Ebisu Shrine located right in front of the temple across the street (Yamato Oji Street). Ebisu Shrine was founded as the guardian deity of Kennin-ji Temple. Enshrined there is "Ebisu" (= God of wealth), one of the seven lucky Gods. Kyoto Ebisu Shrine is a powerful spot for those who wish for their success in business and for being rich. It is one of the three major Ebisu shrines in Japan (other two = Osaka and Hyogo). 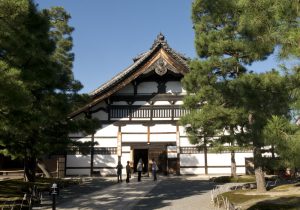 "Honbo" Chamber which serves as the priests' dormitory, as well as the main entrance for the visitors. 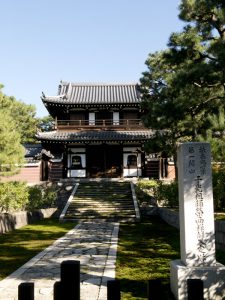 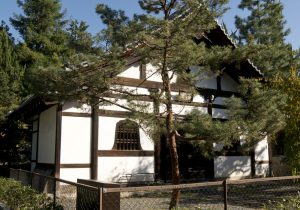 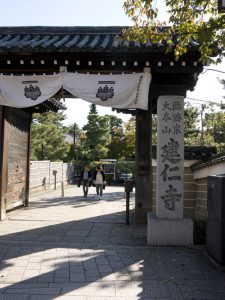 East gate, located at the south-end of Hanami-koji Street 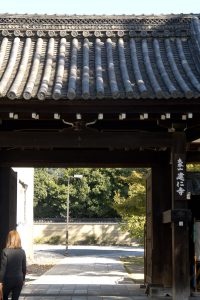 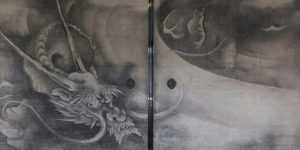 "Unryu-zu" sliding panels in Hojo Hall - Dragon cruising in the clouds, painted by "Yusho Kaiho" in the 16th century. It is painted over a span of 8 panels. 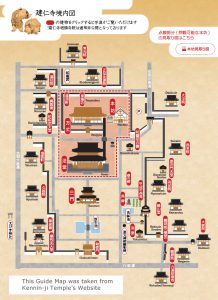 Map of the temple ground - from Kennin-ji Temple's website