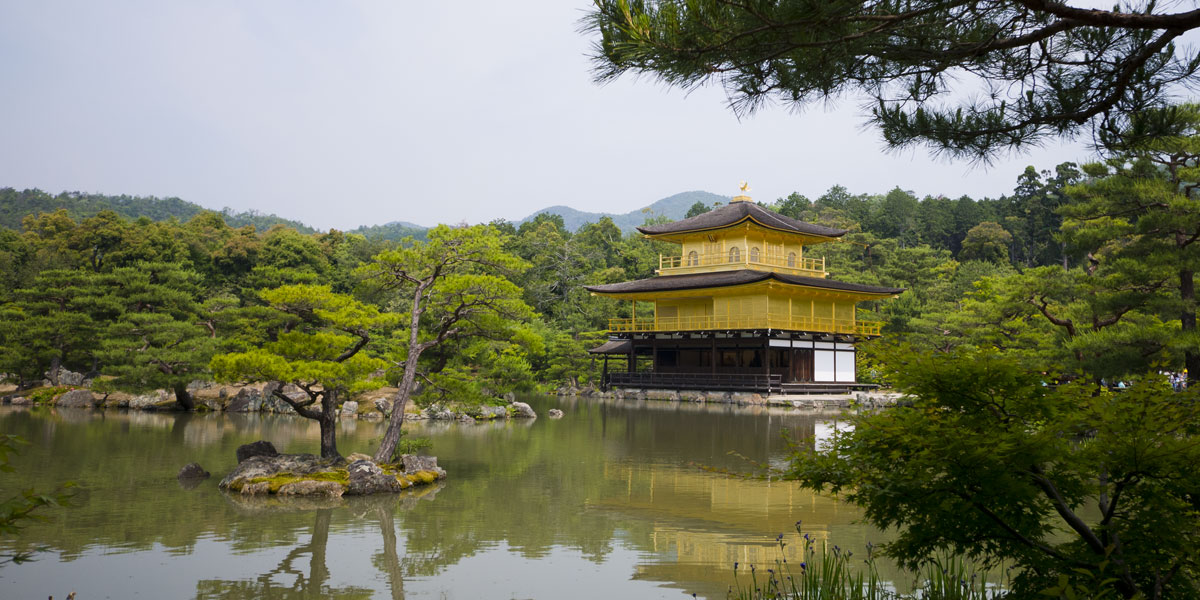 I am not a big fan of Kinkaku-ji Temple. There are several reasons for that.

I might there on occasion, though, to see the magnificent view of the Golden Pavilion covered with Gold foils reflecting the sunlight. Originally, Kintsune Saionji, an influential court noble in Kamakura Period (1185 - 1333), built a mountain villa in 1224 in the precinct where the present Kinkaku-ji Temple stands. From there on, the villa had been owned by the offspring of Saionji family. But after the downfall of Kamakura Shogunate government, the authority of Saionji family was weakened. To reinstate the family's authority, Kinmune Saionji, an offspring of Kintsune Saionji, plotted an assassination of Emperor Godaigo, the ruler at the time, by inviting the Emperor to the villa. The attempt failed and Kinmune was captured and executed. The villa was then confiscated and abandoned for some time.

In 1408, Yoshimitsu died and his wife, Yasuko Hino, succeeded Kitayama-dono and lived there until she passed away. In 1420, a year after Yasuko died, Kitayama-dono was renamed to "Rokuon-ji" Temple and began serving as a Zen Buddhist temple, following the will of Yoshimitsu.

During Onin War, a civil war which lasted for 10 years from 1467 to 1477, Rokuon-ji Temple was used as a camp for Western Army, during which time most of the buildings were reduced to ashes. Restorations of the buildings started in Edo Period, and in 1649 the restoration of Main Hall was completed. It was 1894 when the temple became open for public, when the popular name "Kinkaku-ji" (Golden Pavilion) was given to the Main Hall. The reason why people started calling it Kinkaku-ji is that the Main Hall was covered with Gold foils ("Kin" = Gold, in Japanese).

Unlike gold foiled exterior walls of Kinkaku-ji, the walls of Ginkaku-ji are just bare wood. "Gin" of Ginkaku-ji means Silver in Japanese, and those who are visiting Ginkaku-ji expect the Main Hall would be Silver foiled, but it is not. Ginkaku-ji Temple was founded by Yoshimasa Ashikaga, the 8th Shogun of Muromachi Shogunate government, as his retreat. He thought Zen temple was supposed to be simple and plain, unlike Golden Pavilion, so no Silver foils were applied to the exterior walls.

Kinkaku-ji Temple was set on fire by a scholar monk in 1950. His name was "Yoken". His father was a head priest of a small temple in northern town of Kyoto, but he had a serious tuberculosis and he was in bed most of the time. He wrote a letter to the head priest of Kinkaku-ji Temple and asked him to adopt his son as an apprentice. The head priest of Kinkaku-ji Temple accepted Yoken, and his new life started there. In 1950, though, he set fire to the Main Hall (Golden Pavilion) and it was completely burnt down. It is said that Yoken was struggled with a dilemma that most of his daily tasks had to do with making money from the worshipers and the visitors to the temple instead of devoting himself to pure religious services. With the dilemma and his inferiority complex (he had a stammering symptom), he may have been mentally collapsed over the years and that made him set fire on the temple.

Yoken was arrested by the police and was imprisoned for 7 years. In the following year of his discharge from the prison, he died of tuberculosis like his father. His mother - she killed herself soon after Yoken was arrested, by jumping from the train in motion. Really tragic consequences.

In 1955, Kinkaku-ji Temple was restored and it looked much more beautiful than ever, but the status of National Treasure was lost. To be designated a national treasure in Japan, the structure is supposed to remain as is for at least 200 years...