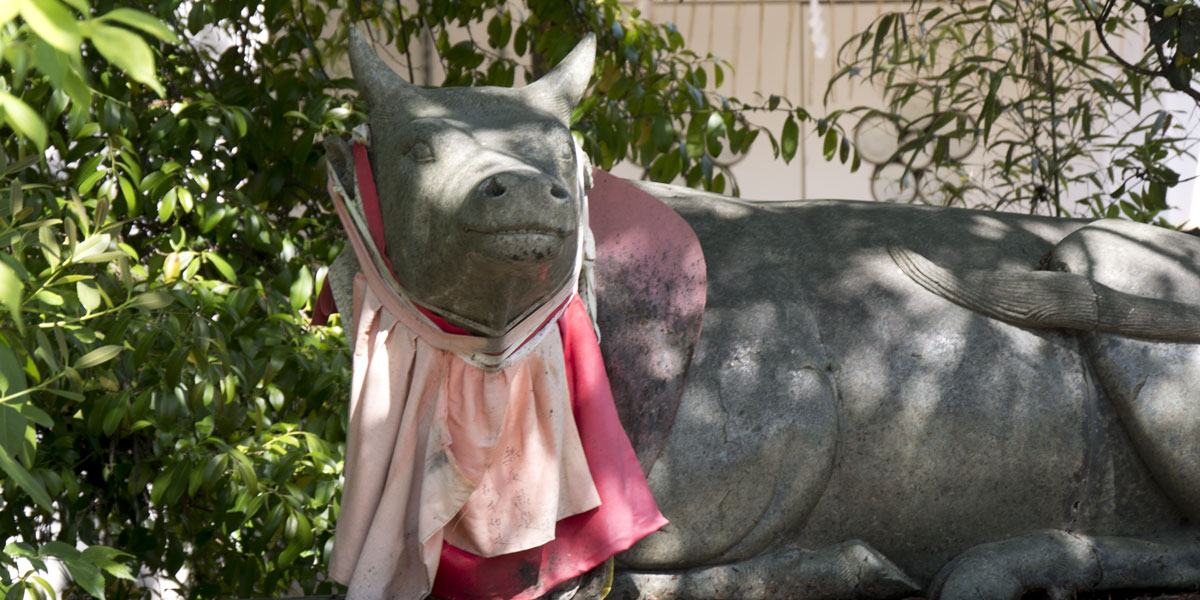 Shrine near a beautiful and quiet Geisha Town Kitano-Tenmangu Shrine is located a bit far away from central Kyoto area, but worth visiting. "Kamishichi-ken", one of the five Geisha towns in Kyoto, is right next to the shrine, so whenever I visit Kitano-Tenmangu, I also walk to Kamishichi-ken where there are restaurants, cafes and from time to time I can see Geisha girls with beautiful Kimono heading to Ocha-ya (= tea house, where they entertain their guests). Gion is the most popular Geisha town in Kyoto, but it is always overwhelmingly crowded with tourists, whereas Kamishichi-ken is much quieter and I can feel elegance of an old Geisha town. There are more than 10,000 shrines with "-Tenmangu" or "-Tenjin" suffix throughout Japan. All of them are affiliated shrines of Kitano-Tenmangu and  they are dedicated to God of Learning - "Sugawara-no-Michizane" (845 - 903). He was born as a court-noble, and was a scholar and a successful politician in Heian Period. He was so brilliant and capable that he was eventually promoted to the position of "Udaijin" (Minister of the Right)  directly supporting the Emperor. His future looked promising, but his counter-part "Fujiwara-no-Tokihira" who was "Sadaijin" (Minister of the Left) was not happy with him. Born in Fujiwara clan, a powerful family of successive Regents, Tokihira did not want to see Michizane taking the helm of state. So he schemed discrediting Michizane by making a false accusation. Due to that, Michizane lost his credit and he was transferred to Dazaifu (Kyushu Island), where he died in despair. After Michizane's death, series of bad incidents occurred in Kyoto, such as great fires, lightning strikes, epidemics, etc. These were said to be caused by the curse of Michizane. His vengeful spirit also caused deaths of core members of Fujiwara clan including Tokihira who were involved in the scheme to get rid of Michizane. One day, a huge lightning hit "Seiryo-den" building (Emperor's residential quarter in the Palace), by which a number of people died and the Emperor himself became sick in bed. Since then, people had started deifying Michizane as Thunder God. In fact, Michizane's posthumous name was "Soramitsu-Daijizai-Tenjin" - meaing "Vengeful soul of Michizane filled the whole sky, and the soul became Thunder God". Imperial court was nervous about the bad incidents occurring one after another, and finally an Imperial order was issued to build a shrine to repose Michizane's soul. The shrine was completed in 947 in Kitano area where Michizane's favorite horse riding ground was located. Later in 987, the shrine was given the name "Kitano-Tenmangu". Meanwhile, Michizane's honor was retrieved by the Imperial Court and his previous position "Udaijin" (Minister of the Right) was reinstated.

Besides the place to mollify the soul of deified Michizane, Kitano-Tenmangu used to serve as a shrine highly revered by the Imperial families over generations as their guardian deity. Later in Edo Period (1603 - 1868), when education became more popular among ordinary people, Michizane began to be worshiped more as God of Learning, rather than Thunder God. People wanted to be successful in their careers through learning just like Michizane's brilliant career path. Nowadays, Kitano-Tenmangu (and also other Tenmangu and Tenjin shrines in Japan) is popular among those who are taking school entrance and various qualification exams. They visit the shine and pray to deified Michizane asking him to give power to pass the exams.

Rubbing Cows and Plum Trees in the precinct Rubbing Cow. Color of the head has changed because it has been rubbed by a lot of people.

You will notice there are statues of Cow all over the precinct of Kitano-Tenmangu. Cow is considered the divine servant (or messenger) of God Michizane. We call them "Nade-Ushi" (= Rubbing Cow). It has been believed that gently rubbing the head of cow statue is good to be smarter in learning. The same goes for most of the other Tenmangu and Tenjin shrines. Plum trees in the precinct. Plum grove is open to the public between late January and mid March.

Michizane loved Plum trees, so there are many Plum trees planted in the precinct. Those Plum trees are really beautiful in early spring (Feb - Mar) and lots of people visit there during that time to see the pink and white blossoms. There is a legend... One of the Plum trees in Kyoto was so loved by Michizane that it traveled by itself all the way to Dazaifu where Michizane was exiled. The Plum tree was called "Tobi-Ume" (= Flying Plum Tree). It wanted to stay closer to him.

Open-Air Market held on every 25th of the month

Michizane's birthday was 25th of June, and it was 25th of February when he died. So, 25th has been a special day for those who have worshiped God Michizane. On the 25th of each month, open-air market is held inside the precinct of Kitano-Tenmangu. Hundreds of stalls appear there selling finger foods, vintage stuff, handicrafts, etc.

"San-Ko-Mon" Gate - a mystery of the shrine San-Ko-Mon Inner Gate - the entrance to the main shrine.

Main gate of Kitano-Tenmangu faces Imadegawa Steet. Get in from there and walk on the stone-paved path with the beautiful Plum grove on your left towards the Tower Gate. After getting through the Tower Gate, continue walking on the left path which takes you to "San-Ko-Mon" inner gate (Important Cultural Property). San-Ko-Mon means "gate of three major stellar lights". Sun + Moon + Star were intended to be curved on the gate. Although we can see Sun and Moon carvings, but no Star is there. According to one of the shrine maidens, beautiful North Star can be seen right above San-Ko-Mon gate in the clear night sky, and that's why no Star was carved on the gate.

After going through San-Ko-Mon gate, you are in the inner precinct where the main shrine stands. Pray there for something in mind, and then get out of the inner precinct from the gate on your right. Turn to the left and you can see a small Plum garden along the arrays of stone lanterns towards the East gate. The entrance of Kamishichi-ken Geisha town is right in front of the East gate. 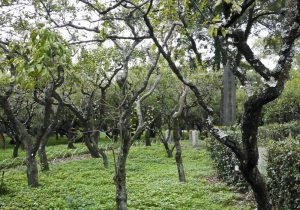 Plum Garden in autumn (a bit too early for Plum blossoms) 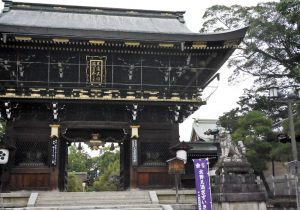 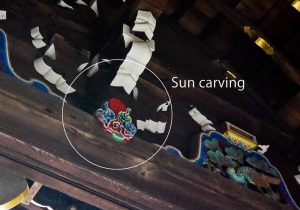 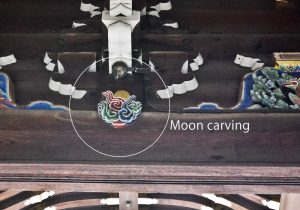 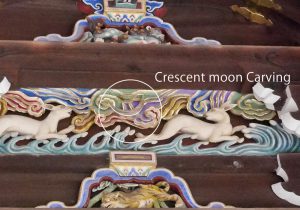 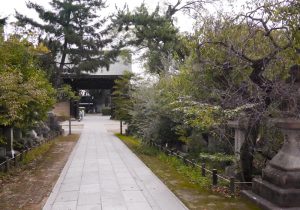 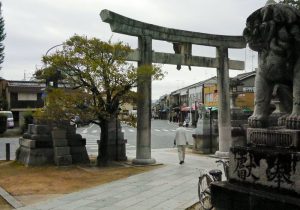 East gate of the shrine, facing the entrance of Kamishichiken Geisha Town. 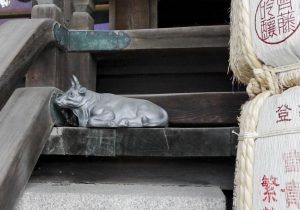 Lots of statues of cows in the precinct. This one is sitting at a corner of the main shrine. 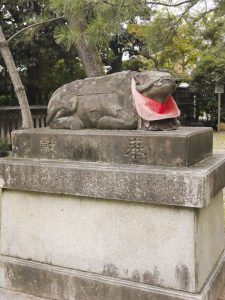 Another statue of cow 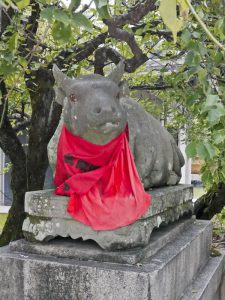 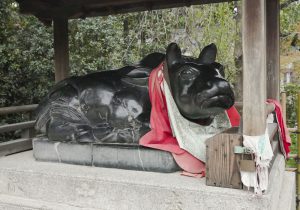 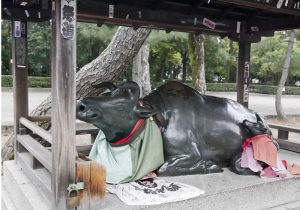 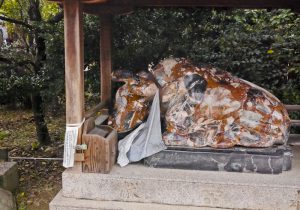 This statue of cow is made of marble, I guess. 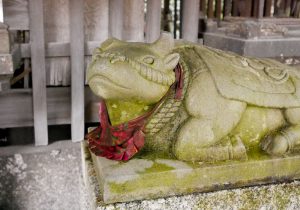 Stone statue of cow sitting at one of the purification troughs. 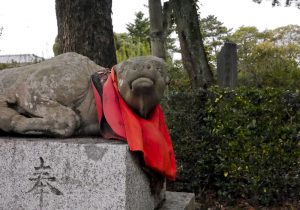 I really like this statue of cow. Very cute. 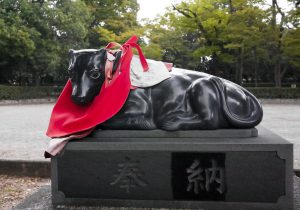 This statue is relatively new. Looks like a dog, but it is a cow statue.