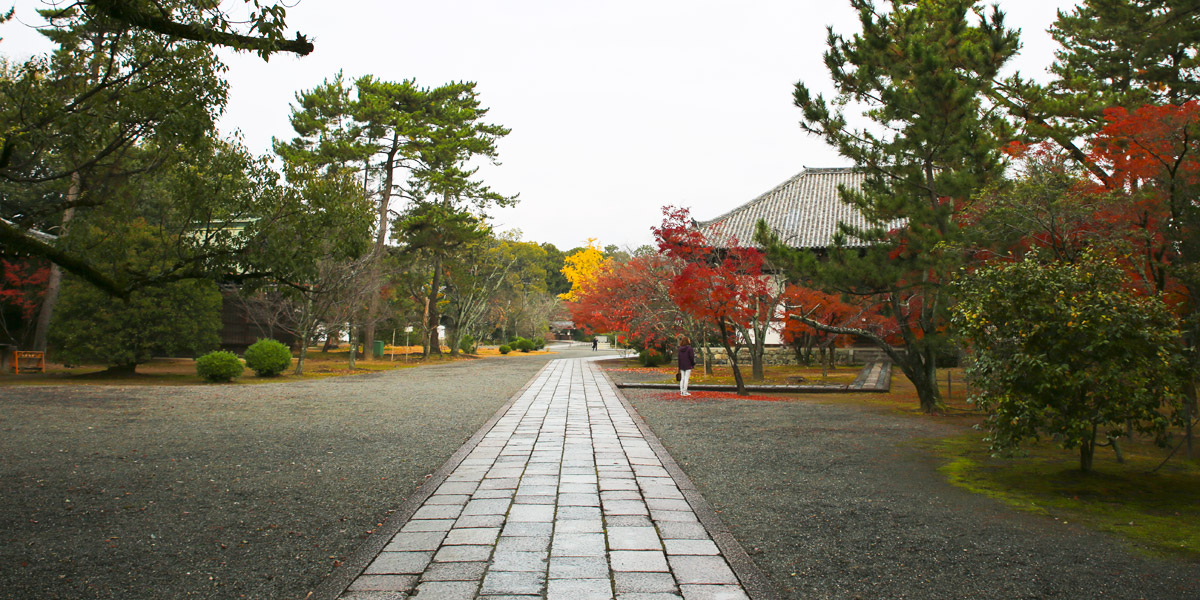 The Oldest Temple in Kyoto 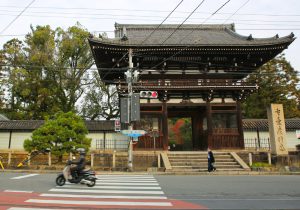 I think this temple is usually quiet throughout the year. Maybe the reason is that the temple has not proactively advertised itself to the public - they do not even has their own website... Actually, that is why I love this temple. It is always nice to see fewer people when stepping into old temples. Precinct of the temple is large enough, and good to walk around. 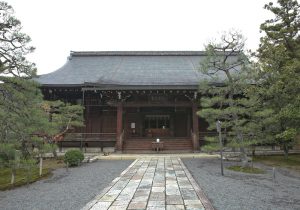 According to "Nihon Shoki" (ancient chronicles of Japan), this temple was built sometime early in 7th Century, way before the capital was relocated to Kyoto (794). Unfortunately, detailed history of the temple is unknown because old documents which belonged to the temple were all burnt in fire in 818. So, there have been several different presumptions regarding the temple's history. But I think the uncertain factors can make the history more mysterious and fascinating. 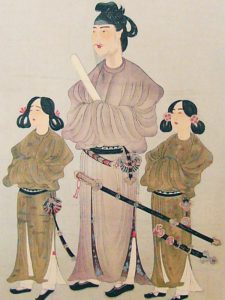 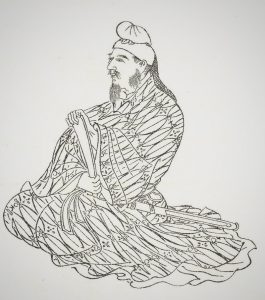 Hata clan was an immigrant clan who would live in Yamashiro-no-Kuni province (= ancient Kyoto). It has been said that they were descendants of Qin Dynasty of Imperial China and moved into Japan through Korean Peninsula sometime in the 3rd Century. They brought into Japan a set of highly advanced technologies such as flood control, metal fabrication, civil engineering + development, textile, etc. They were so successful in developing Yamashiro-no-Kuni province, that they received full recognition from the Imperial Court. They were recognized, so to speak, as an ultimate general contractor. One day, "Hata-no-Kawakatsu" (patriarch of Hata clan at the time) was granted a beautiful statue of crowned Miroku-Bosatsu by Prince Shotoku. He built a temple to enshrine the statue and named it "Hachioka-dera" Temple, which served as the family temple of Hata clan. Later in its history, the temple changed its name to the current "Kyoryu-ji" Temple.

Another Version of Miroku-Bosatsu in the Temple 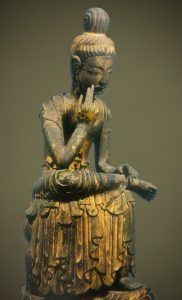 Transitions of Principal Images of the Temple

Again, Koryu-ji Temple was originally just the family temple of Hata clan. But later, Hata clan got closer to the Imperial Court with their increasing political influences, and accordingly the status of their family temple was upgraded to "Jogaku-ji" class (= temple sponsored by Imperial family). Due to that, the principal image of the temple was changed from Miroku-Bosatsu to Healing Buddha in 797. The temple was burnt down several times by fires and was restored each time. Surprisingly, most of the wooden statues remained safe. In 1120, statue of Prince Shotoku was added to the temple's collection of statues. And that was when Prince Shotoku became the principal image of the temple. 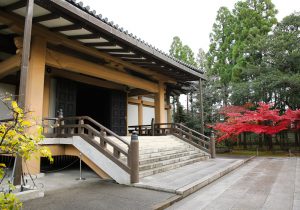 Majority of the statues including the ones of Miroku-Bosatsu are displayed to the public in "Shin-Reiho-Den" (New Treasure Hall). You will be amazed to see the collection of statues - 17 x National Treasure and 31 x Important Cultural Property. Unfortunately, the statue of Prince Shotoku enshrined in the Main Hall is not publicly displayed.

Nearby Places to Visit 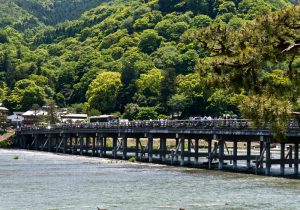 Togetsu-kyo Bridge in Arashiyama. One of the most popular spots in Kyoto.

The area where Koryu-ji Temple is located is called "Uzumasa". There are not many popular sightseeing spots in the area, but Uzumasa is pretty close to Arashiyama area where there are lots to see - Togetsu-kyo Bridge, Tenryu-ji Temple, famous Bamboo Groves, etc. So, I suggest that you visit Koryu-ji Temple on the way to/from Arashiyama area. Take "Keifuku Randen Tram Line" which runs on streets in north-west of the city between Shijo Omiya and Arashiyama, and it stops at Koryu-ji Temple. If you are lucky, you can enjoy the city journey on the oldest tram car which was built in 1971. It will make you feel nostalgic, for sure. 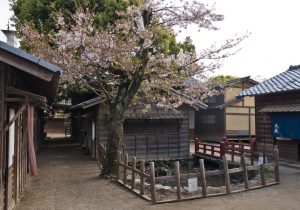 The other place, if you are with kid(s), is "Toei Kyoto Studio Park" which is really close (walking distance) to Koryu-ji Temple. It is a movie studio where Japanese "Jidaigeki" (period dramas) featuring Samurai and Ninja are filmed. All the outdoor sets for the filming will bring you back in time. It is a fun place to visit, although the admission is a bit pricey (Yen 2,200 for an adult, Yen 1,300 for a kid). Also, many of the attractions performed daily in the studio charge you extra Yen 500 or more, so you can end up spending Yen 10,000 easily if your party is 4 - 5. But again, it is worth visiting there, especially if you are with kid(s) who are crazy about Samurai or Ninja. 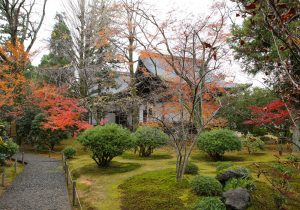 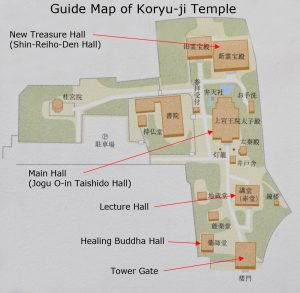 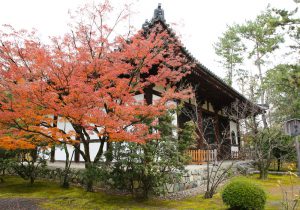 Lecture Hall where statue of Amithaba (Amida Nyorai) is enshrined. 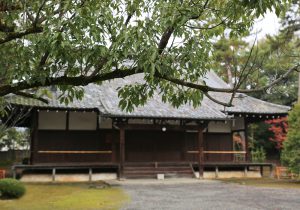 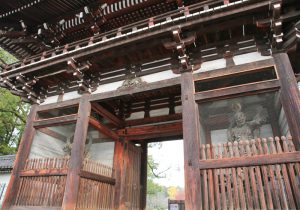