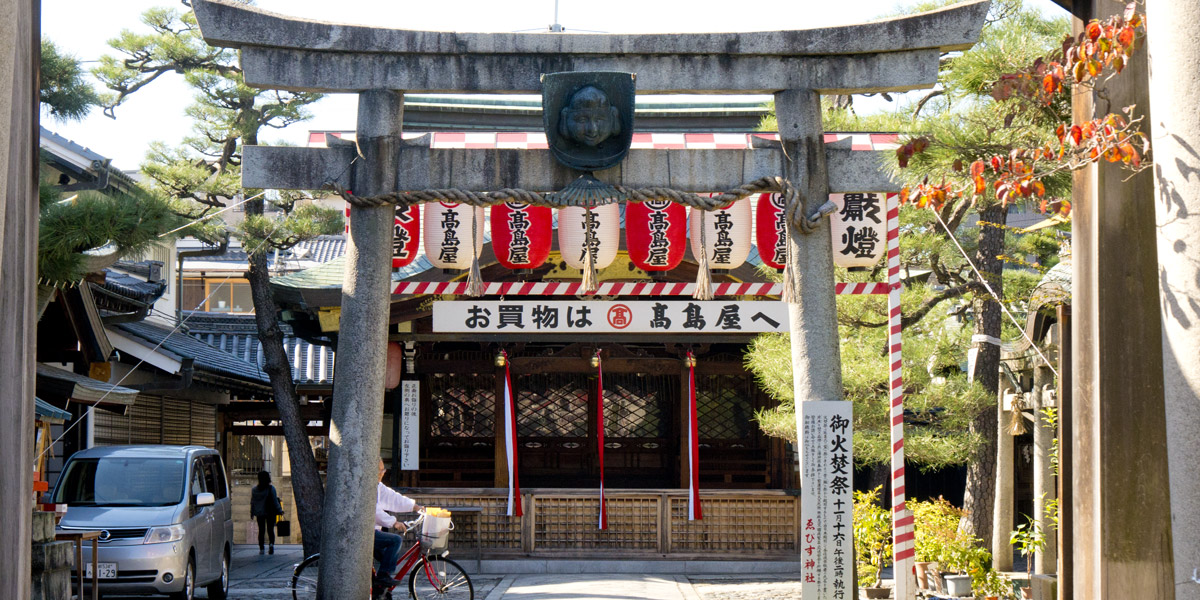 One of the three major "Ebisu" shrines in Japan "Ebisu" is God of wealth + bumper crop, and one of the seven Gods of good fortune. Other six Gods were originated from either India or China, but Ebisu is from Japan. There are three major shrines where Ebisu is enshrined - Kyoto Ebisu Shrine, Imamiya Ebisu Shrine in Osaka and Nishinomiya Shrine in Hyogo.

Kyoto Ebisu Shrine was built in 1202, when Kennin-ji Temple was founded across the street. Although it was built as the guardian deity of Kennin-ji Temple, it became popular by itself among the people in town as the local deity making their wishes come true - wishes include not just success in commerce, but prosperous fortunes of family, travel safety, etc.

Big event is held in early Janaury every year At Kyoto Ebisu Shrine (and other Ebisu Shrines), there is a big event to celebrate new year honoring God Ebisu between the 8th and 12th of January each year. We call it "Toka-Ebisu" Festival which means "10th Day Festival of Ebisu". As the name of it indicates, 10th of January is the biggest day of the festival. Two days before and after the 10th of January have specific meanings and the opening hours are different. God Ebisu enshrined in the back of the main shrine.

During the festival, lots of people come to see God Ebisu and pray for something in mind (mainly having to do with $$$ and happiness in their families). In middle of the festival, a huge whole Maguro (= Tuna) is placed in front of the main shrine as an offering to God Ebisu. I guess the Tuna is consumed later by the people who contributed to the festival. People visiting the shrine during the festival buy lucky charms decorated with Bamboo leaves. Bamboo leaf is symbolic in Ebisu worship - Bamboo is flexible yet robust, and it grows well with leaves not falling from branches, so Bamboo became the symbol of prosperity. Knocking wall in the back. Don't forget to say "Please make my wish come true".

FYI, God Ebisu is said to be hard of hearing. So, even though you pray something in front of the main shrine, he may not notice it. So, go to the left side of the main shrine and knock on the wall to let him know you came to see him.

Another God Ebisu in Yasaka Shrine - A subsidiary Rake on top of inner Torii gate. Throw your coins at the rake.

BTW, there is a wire-netted rake on top of inner Torii gate. Throw one of the coins in your pocket at the rake. If the coin lands in the rake, you will be in good luck.