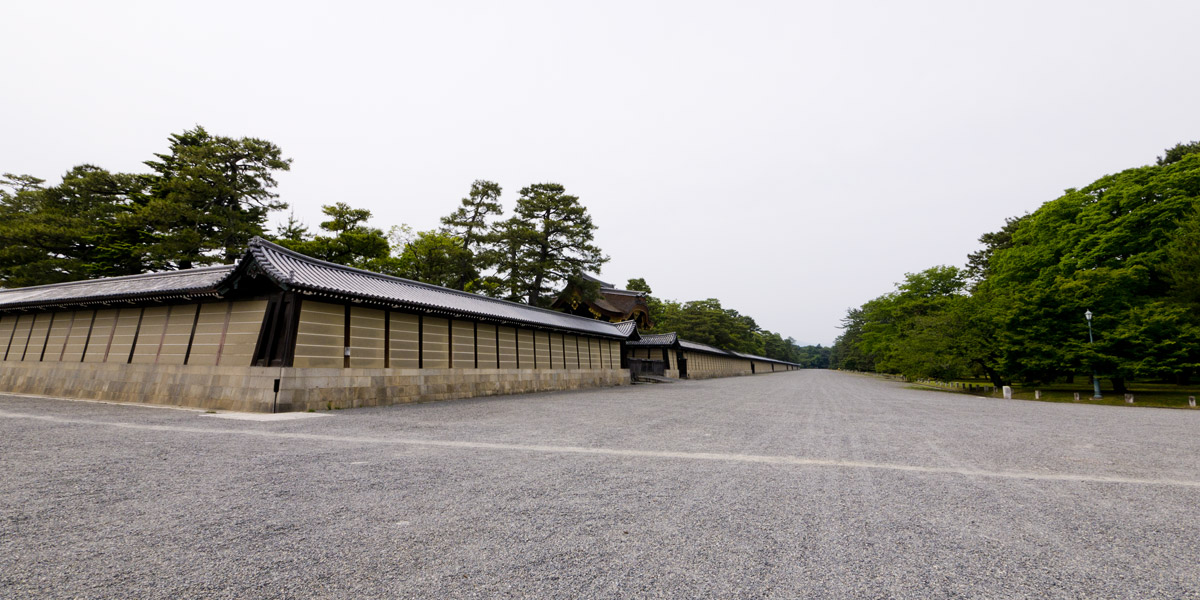 Huge municipal park where lots of locals and tourists walk in and linger on sunny days.

Kyoto Gyoen is one of the three National Gardens in Japan (the other two gardens are "Shinjuku Gyoen" and "Kokyo Gaien" in Tokyo). It is HUGE ! 1,300 meters from South to North, and 700 meters from East to West. It seems to me that the garden takes up almost 5% of the entire central Kyoto. When you go there, make sure to put on sturdy walking shoes - lots of walking there. Inside Kyoto Imperial Palace - you need to get a permit to get in.

Besides Kyoto Imperial Palace, there are some other buildings inside the park you may want to visit; Beautiful Japanese garden in Sento Imperial Palace - you need a permit to get in.

Sento Imperial Palace: This imperial palace was originally the residence of retired Emperors. Although the residence itself is no longer there (burnt down by fire), there are still two tea ceremony houses and a beautiful garden. To visit there, you need to apply for a permission. There is another building in the same ground called Omiya Palace which used to be the residence of Empresses. It is not open for public and is still used by Imperial family as a villa in Kyoto. Kyoto State Guest House: This guest house is for VIP's visiting Japan as official guests of Japanese Government. President Obama stayed there when he visited Kyoto. It is open for public, but you need a permission to get in. Visit the website of Cabinet Office to see the open dates and how to get the permissions.

Shusui-tei Tea Ceremony House: It is open on every Friday and Saturday between March and December. You do not need an advance permission. Admission fee is Yen 100 per person. It is a really beautiful tea ceremony house with gorgeous garden.

Kan-In-no-Miya Residence: This was the residence of Kan-In-no-Miya family, one of the four major Imperial Prince's families. This beautiful residence is open everyday except for Mondays and the year-end/new-year holidays. BTW, there is a very interesting spot in Kyoto Gyoen - Saruga-Tsuji Corner. This corner is the north-east corner of the walls enclosing Kyoto Imperial Palace. North-east has been said to be the Demon's Gate (bad direction), and the corner is recessed to confuse Demon trying to get in the Palace. Also, there is a statue of monkey covered by wire net under the roof. Statue of a Monkey under the roof.

The ground in Kyoto Gyoen is not paved - not good for cyclists. But, there are narrow traces in the gravel ground plowed over the years by bicycles going back and forth in Imperial Palace. Cyclists use these traces as their bicycle lanes and interestingly people walking in Kyoto Gyoen stay out of the traces not to bother cyclists.

About 200 meters north of Go-ou Jinja Shrine, there is a nice hotel called Heian Hotel. I love the cafe in the hotel - "Albois", which faces a beautiful Japanese garden with a pond. They have very affordable lunch menu items. If you happen to be in the area around lunch time, I suggest that you have lunch there with a glass of wine, overlooking the Japanese garden. 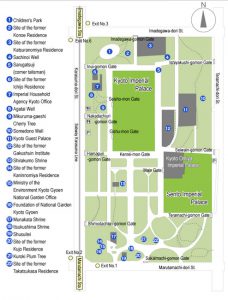 Map inside Kyoto Gyoen National Garden. It is a huge garden, so you have got to be smart enough when thinking about how to walk around. 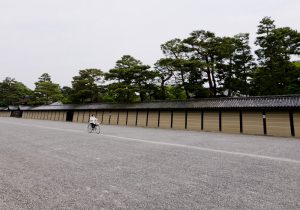 A woman is riding a bicycle on the narrow trace 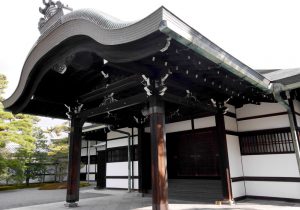 Entrance of the main building in Kyoto Imperial Palace 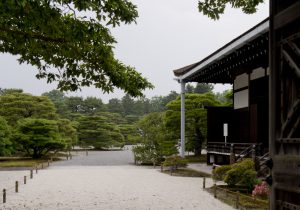 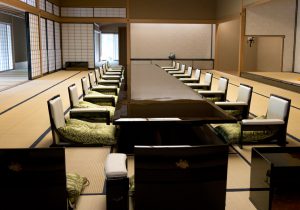 One of the dining rooms in Kyoto State Guest House