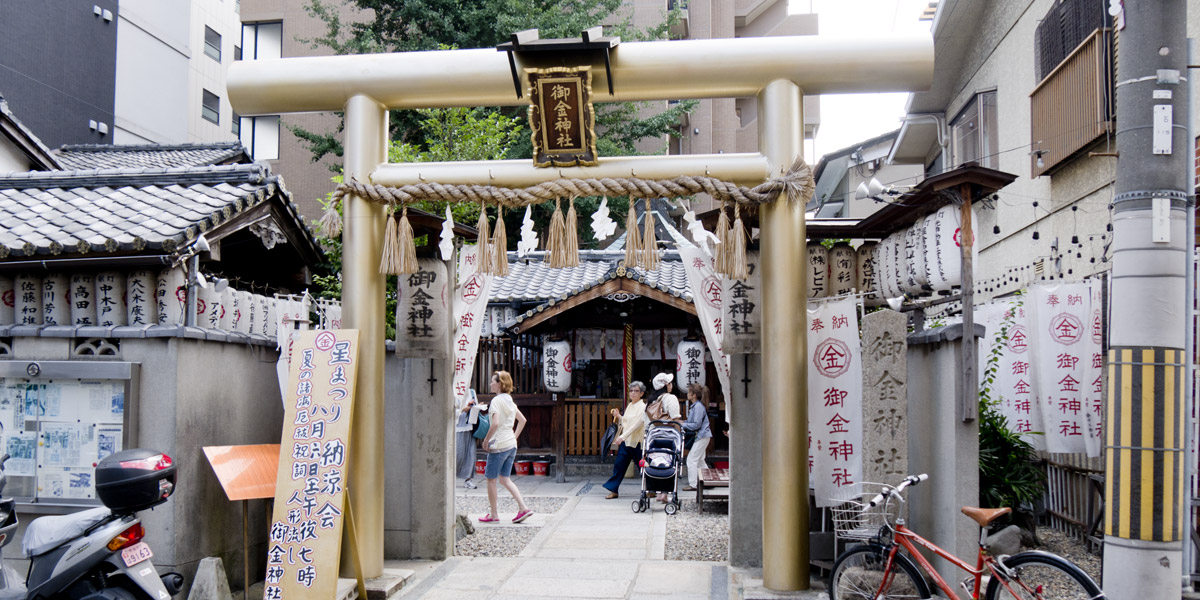 Really a small shrine in a residential zone of Central Kyoto.

Mikane Shrine is a very very small shrine located north of Nishinotoin St. near Oike St. It is not spectacular nor gorgeous at all as a sightseeing spot, but I do like this shrine because of its miraculous power to make prayers' wishes come true. And vast majority of the wishes granted here are all about "MONEY" ! In fact, there are a number of people who won the lotteries by visiting this shrine before buying lottery tickets (and/or after buying them). If you really want to win a lottery, or if you want to be successful in stock investment, real-estate speculation, etc., this shrine is the one you should visit. There are not many shrines where you can pray for being a billionaire without feeling shame. I visit this shrine from time to time, dreaming of me being a rich guy.

Originally it was the God of Mining Many of the visitors are the locals. They stop at the shrine whenever they come by and pray to the God for something in mind.

Enshrined here is a God called "Kaneyama-hiko-no-kami" who appears in a myth of ancient Japan as God for Mining. People were praying for success in mining business, and then that tradition gradually extended to those who were in related occupations such as swordsmith, blacksmith, etc. And from there on, people started believing that the God would grant their wishes for money which was originally made of various metals.

The God was hidden in a Residence of an Ordinary Family

Interestingly, the God was enshrined in a residence of an ordinary family, without being exposed to the public. In 1883, however, one of the religious advocates in town founded a shrine nearby and moved the God into it. Then, the shrine was named "Minake Jinja", and that was when people began visiting the shrine.

Ginko Tree of a Miracle Power Ginko leaf shaped votive tablets. If you are lucky in autumn, you can find a real fallen Ginko leaf in the precinct.

There is a Ginko tree in the backyard of the shrine. It has been said the fallen leaves of the Ginko tree have miraculous power from the God. Also, the shrine sells a good fortune wallet for Yen 1,000. If you buy a lottery ticket, the best way to maximize the chance of winning is to buy the wallet and put the lottery ticket in the wallet together with a fallen Ginko leaf - you are all set !

Shrine is Open both Day and Night

When the shrine was founded, two other Gods were enshrined, too. One of them is Amaterasuomi-kami (Goddess of the sun), the major deity of Shintoism. Another God is Tsukiyomino-kami (God of the moon). Thanks to these God's (God of Sun and God of Moon), the shrine is open not only in the daytime but in the night.

Mikane Shrine is located in a quiet residential zone, a little north of central Kyoto. It is usually quieter than the highly popular sightseeing spots. So, my recommendation is that you visit nearby popular spot such as Nijo-jo Castle early in the morning before it gets packed with tourists, and after that you walk to Mikane Shrine. Or, you can visit Mikane Shrine after dinner somewhere around Karasuma Oike area where there are lots of restaurants and bars.