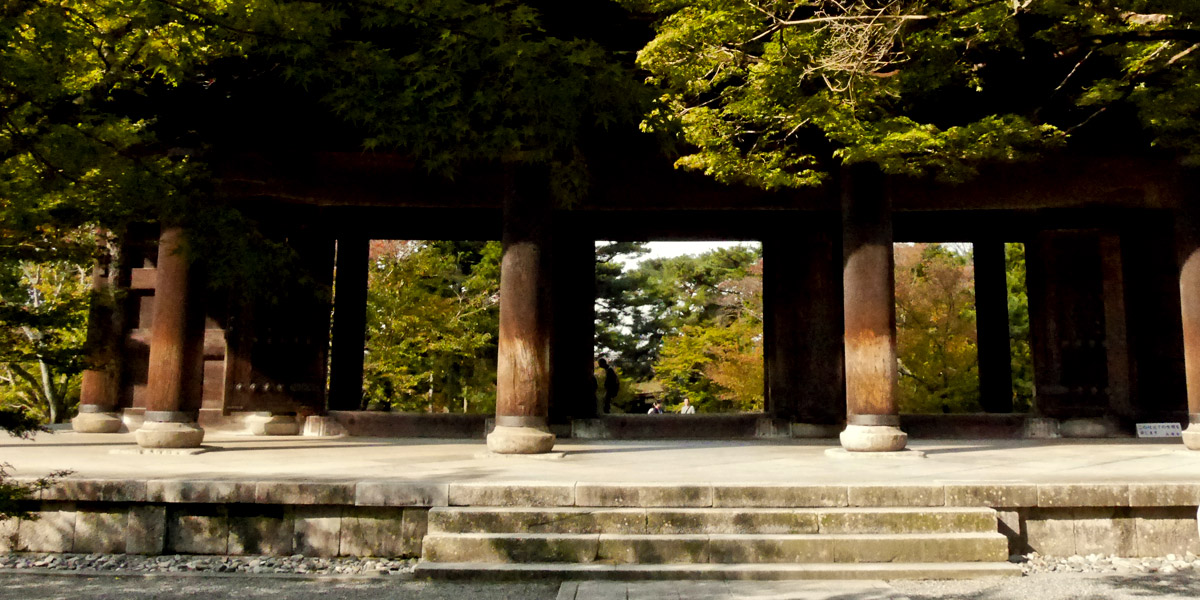 Nanzen-ji is the head temple of Nanzen-ji school of Rinzai Buddhist sect. It was formerly a detached palace called "Zenrin-ji-dono" built by Cloistered Emperor Kameyama in 1264. In 1291, Zenrin-ji-dono changed its name to "Ryoansan-Zenrin-Zen-ji" and began serving as a Zen Buddhist temple. Later in 1308, name of the temple was changed to the current name. The rank of Nanzen-ji Temple is the highest among all Zen Buddhist temples in Kyoto. The area around Nanzen-ji Temple has been well-known as the home of Tofu. Tofu (= soy bean curd) is made from soy milk, clean water and a little bit of bittern. Tofu was a perfect food for Buddhist monks who were not supposed to eat animals. Nanzen-ji Temple monks were making Tofu by themselves for them to eat, and they also served Tofu to the visitors. And later, restaurants such as Okutan, Junsei, Yachiyo, etc. were open one after another alongside the front street of the temple, and they are still considered top Tofu restaurants in Kyoto. If you like Tofu, stop at one of those Tofu restaurants before or after your visit to Nanzen-ji Temple. Try "Yu-Dofu" - Tofu simmered in hot water with a piece of kelp strip. Yu-Dofu is served with soy sauce mixed with dried-Bonito broth. Tofu by itself is a subtle flavored food and can be a bit bland, but the sauce makes it flavory.

Lots to see in and outside the temple The temple experienced a series of fires in the history and very few original buildings survived. So, most of the buildings are the ones which were restored later on. Even so, I really like visiting this temple because there are lots to see in and outside of the complex of the buildings. What I like the most is "Suiro-Kaku", a high-rise aqueduct of the water coming from Lake Biwa, which runs over the precinct of the temple. It is a really beautiful aqueduct built in 1890 based on the design of Roman Aqueduct in Italy. When the Suiro-Kaku Aqueduct project was launched, many people were against the idea of constructing a modern and Western style aqueduct right next to the traditional Zen temple. But after all, everybody loved the eclectic mix of the old and the new - it is really cool !

Here are other things to see in the temple; Sanmon Gate (Important Cultural Property): This is one of the three biggest Sanmon gates of Japan. Sanmon gate consists of three entering sections, which are considered gateways towards enlightenment;

Entering into the temple through Sanmon Gate is a great deal for those who are becoming Buddhist monks, committing to attain spiritual enlightenment. In a sense, Sanmon gate is a border between profane and sacred. Upper floor of the Sanmon Gate is open to the public (admission = Yen 500). The view overlooking the precinct is gorgeous. Painting on the ceiling of Hodo Lecture Hall - Dragon cruising in clouds.

"Ho-do" Lecture Hall: It is the main hall of the temple, restored in 1909. Enshrined in the hall are statues of "Shaka-Nyorai" (Gautama Buddha), "Monju-Bosatsu" (Manjushri Bodhisattva), "Fugen-Bosatsu" (Samantabhadra Bodhisattva). Although Ho-do lecture hall is not open to the public, you can see the painting of a dragon cruising in clouds on the ceiling from outside. View from the tea room of Hojo Hall.

"Ho-jo" Hall (National Treasure): This was the living quarter of the head priest. Ho-jo Hall of Nanzen-ji Temple is a bit different from those of the other Zen temples. It consists of two different buildings. The larger building was granted by the Imperial Palace and moved from there in 1611. The adjacent smaller building was originally built sometime between 1624 - 1644 in Fushimi Castle, and later it was moved to the current location. Sliding panel paintings in both buildings are of artists trained at Kano school of Japanese painting. Kano school had been predominant in Japanese painting world for as long as 400 years between 15th century and 18th century. Of more than 100 sliding panel paintings, I like the one of "A Pair of Tigers drinking water". I was impressed to see the painting because the artist (Tanyu Kano) painted it just by his imagination inspired by someone who saw Tigers in China (there were no Tigers in Japan then). BTW, many of the paintings in Ho-jo Hall are digitally reproduced copies (originals are safely kept in the depository). Ho-jo Hall Gardens: There are two gardens adjacent to larger building and smaller building. The one in front of the larger building is a dry landscape garden designed by Enshu Kobori (1579 - 1647). He was a feudal lord, and gardener as well as master of tea ceremony. He was also an architect - really a talented guy ! The garden was designated as a National Site of Scenic Beauty in 1951. Another garden on the west side of the smaller building is also a dry landscape garden, expressing "Heart". It was designed in 1966 by Zenkei Shibayama (1894 - 1974) who assumed head priesthood of Nanzen-ji Temple between 1959 and 1974. He was also a talented priest - he served as a professor at Hanazono University and Otani University, and also traveled to the United States eight times to give lectures about Zen Buddhism at various universities there.

Nanzen-in: Nanzen-in is a branch temple of Nanzen-ji Temple. It stands exactly where the original detached palace of Cloistered Emperor Kameyama was built. It went to ruin after Onin Civil War (1467 - 1477), but was restored in 1703 to commemorate the soul of Cloistered Emperor. In Nanzen-in, his statue is enshrined. The garden there is a beautiful promenade style Japanese garden with a pond in its center. It is one of the top three gardens in Kyoto designated as "Historic Site and Special Place of Scenic Beauty".

When Cloistered Emperor Kameyama built his detached palace in 1264, he was annoyed by a ghost appearing there every night. To drive the ghost away, "Mukan-Fumon" who was the head priest of Tofuku-ji Temple at the time was hired to exorcise the detached palace. He stayed there for days together with his apprentice "Un-no". What they did everyday was their regular Zen ascetic practice, with the result that the ghost was gone.

Cloistered Emperor Kameyama was so appreciative of the miraculous power of Mukan-Fumon that he became a devout believer of Zen Buddhism and decided to change the detached palace to a Zen temple. Mukan-Fumon, in spite of his great age, was appointed to the founding priest of the temple in 1291 and the temple was named "Ryoansan-Zenrin-Zen-ji".

Unfortunately, though, Mukan-Fumon passed away soon after he assumed the founding priest. Following his death, hired as the second head priest of the temple was "Nan-In-Kokushi" who learned Zen Buddhism under Mukan-Fumon at Tofuku-ji Temple. He was still young (31 years old) when he became the head priest and he devoted himself to the construction of the temple complex during latter half of his life. In 1308, name of the temple was changed to the current name - "Nanzen-ji" Temple. "Nan" of Nanzen-ji was taken from "Nan" of Nan-In-Kokushi" in commemoration of his contribution. He died at his age of 53. 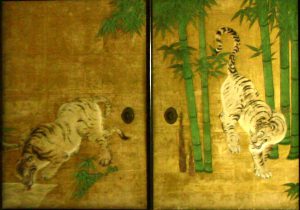 Sliding panels painted by Tanyu Kano. He never saw Tigers, but Tigers in the painting look like Tigers. 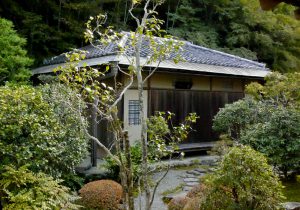 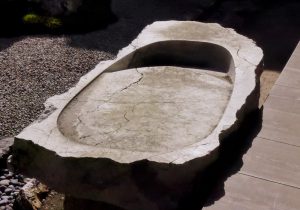 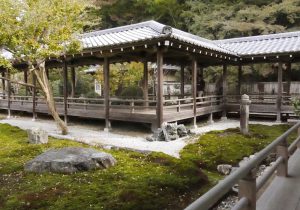 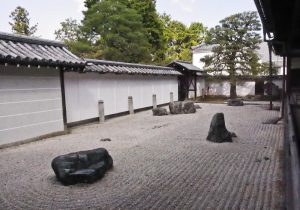 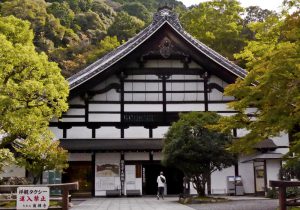 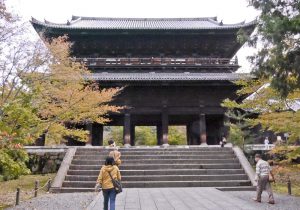 Sanmon Entrance Gate - One of the most beautiful gates in Kyoto.