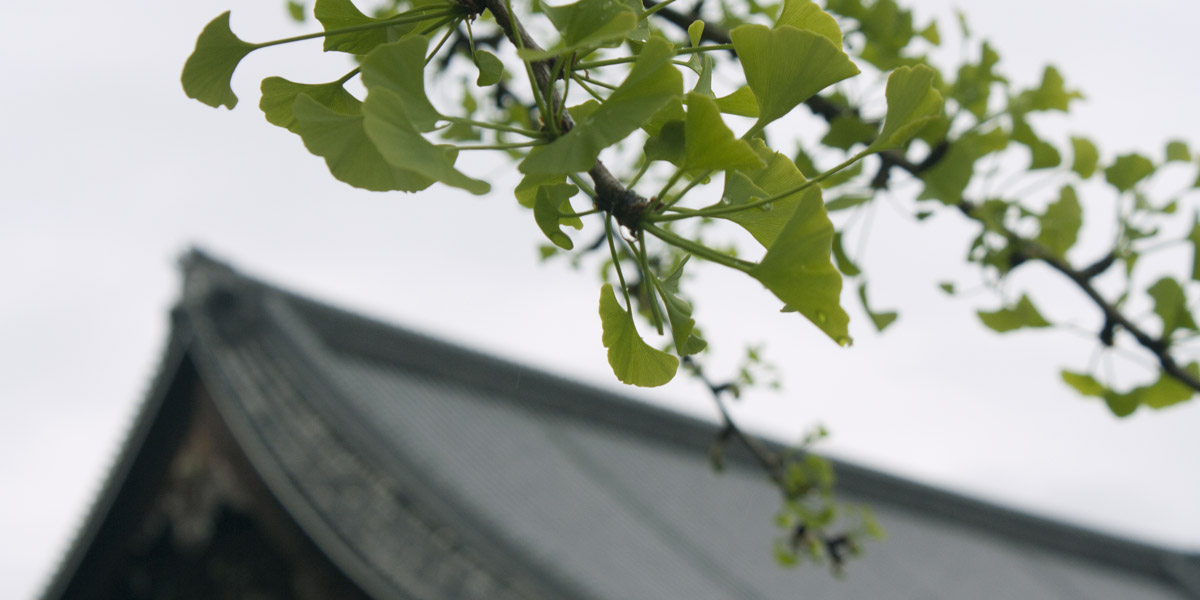 Nishi-Hongan-ji Temple is also about 15 min. walk from JR Kyoto Station, so it is conveniently located. Although this temple is very popular and it looks really gorgeous, I have never seen a big crowd of tourists in this temple - great ! When you enter the temple from the main gate (facing Horikawa St.), two huge buildings will be in your sight. On your right is the main hall called Amidado Hall where a statue of "Dainichi-Nyorai" (= Buddha Amitabha) is enshrined. On your left is Goeido Hall. Enshrined there is the statue of Saint Shinran, the founder of Jodo-Shin Buddhist sect. Goeido Hall is really huge and it can accommodate as many as 1,200 believers at a time. I like the Ginko tree standing in the center of the ground. The temple was burnt down in a big fire in 1617 which broke out from the bathroom, but the Ginko tree survived. So, it has been there for more than 400 years ! The other thing which is of interest is a cat painted on the ceiling board in the lecture hall. It was intended to discourage rats to gnaw the scrolls stored in the lecture hall.

Nishi Hongan-ji is registered as one of the Historic Monuments of Ancient Kyoto as a UNESCO World Heritage Site.

Unique Transitions of the Temple

History of Nishi-Hongan-ji Temple is really complicated. It experienced a lot of ups and downs, and a number of transitions... Jodo-Shin Buddhist sect was founded by St. Shinran in middle of Kamakura Period (1185 - 1333). When he died, he was buried in an abandoned area in the east of the city. In 1272, however, his daughter moved his remains to the area where Chion-in Temple currently stands and built a mausoleum for him. That mausoleum was named "Otani Byo" Hall, and that became the missionary base of Jodo-Shin Buddhist sect. Later around 1321, status of the hall was upgraded to Temple and it was named "Otani Hongan-ji".

As Otani Hongan-ji increased its influence nationwide, they began to be a potential threat to the opponent "Tendai" Buddhist sect headquartered by Enryaku-ji Temple in Mt. Hiei. And in 1465, soldiers of Enryaku-ji attacked Otani Hongan-ji and completely destroyed it. The head priest of Otani Hongan-ji, St. Rennyo, and his apprentices escaped from the temple. Although the temple was gone, they did not give up their missionary work and extended it in various areas away from Kyoto. In 1478, St. Rennyo finally came back to Kyoto and started rebuilding his temple for Jodo-Shin Buddhist sect in Yamashina area and the temple was named "Hongan-ji". Unfortunately, though, St. Rennyo passed away a year before it was completed in 1483.

In 1532, Hongan-ji in Yamashina was attacked and destroyed by the allied force consisting of monk soldiers of opponent Buddhist sect (Nichiren sect) and armies of predominant feudal lords who were against the uprising Jodo-Shin sect.

Priests who escaped from Hongan-ji in Yamashina moved to Ishiyama area in Osaka and continued their missionary activities. The new temple of them was called "Ishiyama Hongan-ji", where they were successful in revitalizing Jodo-Shin Buddhism, gradually regaining its influence in the area.

In 1570, Nobunaga Oda, a powerful feudal lord at the time, opened up the war against Ishiyama Hongan-ji because he could not tolerate their increasing resistance against him. The war lasted almost a decade, but finally in 1580 (March) Ishiyama Hongan-ji surrendered and St. Kennyo (head priest at the time) moved out of the temple with one of his sons, Junnyo, and the other apprentices, settling in Kii Province (current Wakayama Prefecture) to stay away from Nobunaga. On the other hand, another son, Kyonyo, did not obey his father (Kennyo) and continued to be against Nobunaga. But he finally surrendered in August against his will. Since he was disowned by his father St. Kennyo, he had to wander around the country after then. After Nobunaga's death, St. Kennyo was allowed to resume his missionary work to revive Jodo-Shin Buddhism by Hideyoshi Toyotomi, the following ruler after Nobunaga. He then forgave his disowned son, Kyonyo, and reinstated his position in the family. And in 1591, St. Kennyo was allowed by Hideyoshi to move back to Kyoto and was granted a ground to restore Hongan-ji - that is where the current Nishi-Hongan-ji Temple stands.

In 1592, St. Kennyo passed away and the recalled son, Kyonyo, became the head priest of Hongan-ji Temple. But that caused the internal confrontation between the hawkish group headed by Kyonyo and the dovish group led by his younger brother, Junnyo. Their mother (St. Kennyo's wife) thought Kyonyo was not qualified to be the successor because he was the one who endangered Jodo-Shin Buddhist sect with his obstinate hostility against Nobunaga. So, she plotted to have Junnyo to be the head priest with the support of Hideyoshi, demoting Kyonyo to "retired" position to stay behind the stage.

But after Hideyoshi died, Kyonyo secretly approached Ieyasu Tokugawa, the new ruler of Japan, to solicit support to have his own temple. Ieyasu was aware of the internal split between the brothers, and he thought it would be nicer to have them keep being against each other, rather than seeing them reconciled. Ieyasu did not want Hongan-ji Temple to be a threat again to Shogunate government. As a result, Kyonyo was granted a ground near the current Nishi-Hongan-ji Temple and he was allowed to build his own temple in 1603. That is the current Higashi-Hongan-ji Temple. 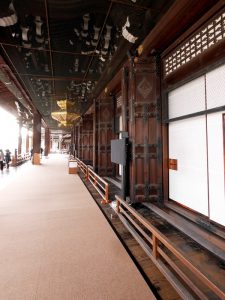 Hallway in front of Amidado Hall 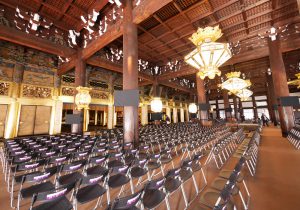 Amidado Hall. Lots of chairs - believers do not have to fold their legs on tatami floor any longer. 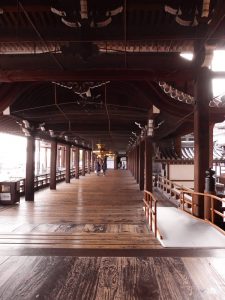 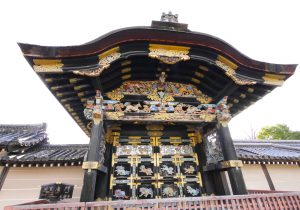 Karamon Gate (National Treasure) located on the south side of the precinct. Beautifully decorated. 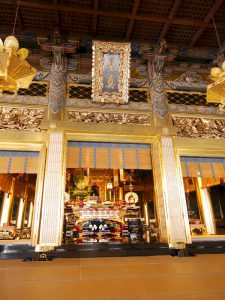 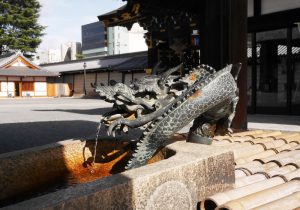 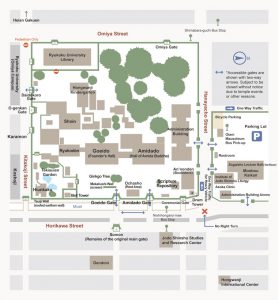