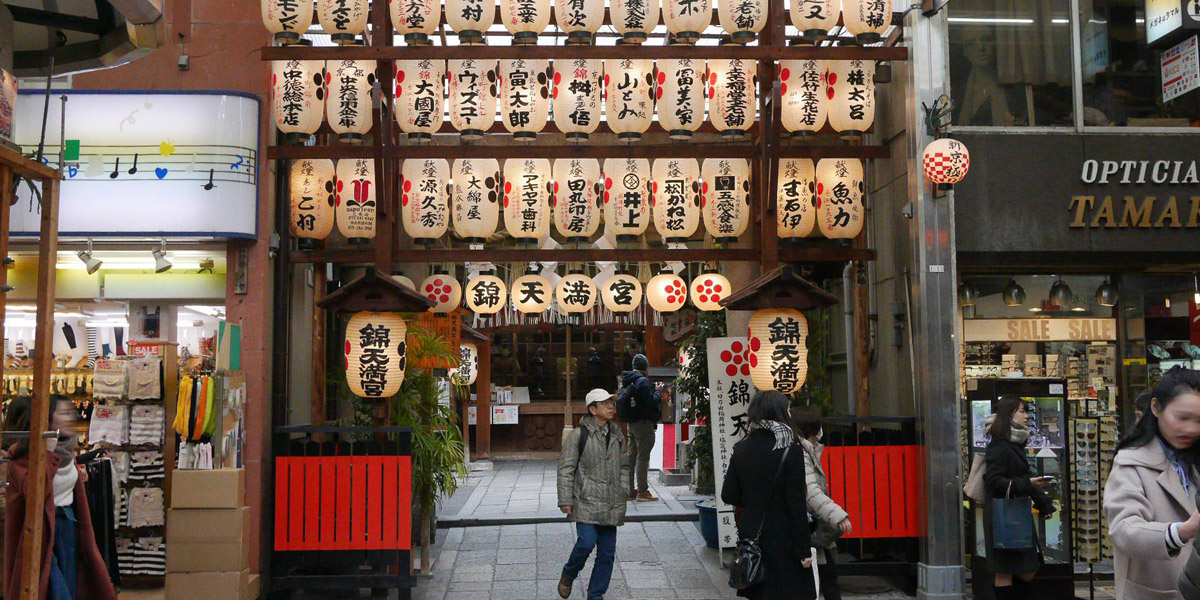 Small Shrine at the end of a Popular Shopping Arcade I love this small shrine, conveniently located at the end of Nishiki Market (shopping arcade) in central Kyoto. It is also in Shin-Kyogoku Shopping Arcade which is parallel to Teramachi Shopping Arcade. All these shopping arcades are highly popular among local people and tourists from all over Japan and and from abroad.

Enshrined is God of Learning Front of the Main Shrine - Fenced with wire net

Ninshiki-Tenmangu enshrines Fujiwara-no-Michizane (845 - 903), who have been worshiped by the people as "God of Learning" (Thunder God, as well). Since Michizane was brilliant and was successful in his career, people pray to Michizane's spirit to get the luck of learning. So, Nishiki-Tenmangu is a popular place for those who are taking entrance exams or qualification exams. They visit the shrine and pray for their success. Although Michizane succeeded in his career as a politician, he was conspired to lose his position by a false accusation by his political enemy, with the result that he was exiled to Dazaifu in Kyushu Island. Two years later (903), he died there in despair. Lots of bad incidents occurred in Kyoto after his death, and people thought those were caused by the curse of Michizane and they deified him as Thunder God. To repose the anger of Michizane's soul, Kitano-Tenmangu Shrine was built by order of Imperial Court. Nowadays, there are many shrines with "-Tenmangu" or "-Tenjin" suffix throughout Japan. All of them are affiliated shrines of Kitano-Tenmangu Shrine, meaning Michizane's spirit is anywhere in Japan. Besides the construction of Kitano-Tenmangu Shrine, a small temple and a tomb for Michizane were built on the ground of his former residence in Kyoto. The temple was named "Kanki-ji" Temple, which was relocated several times later and a shrine was attached at some point during the transitions. Several hundred years later, Kanki-ji Temple was finally granted to "Zendo-ji" Temple in Yawata district, south of Kyoto, while the shrine function was moved to the current location where it began to be called Nishiki-Tenmangu Shrine.

Small Shrine, but Lots to See 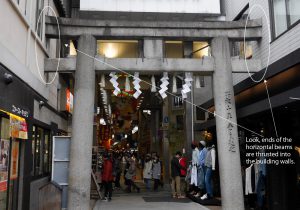 Ends of the horizontal beams are inside the buildings.

I like this cow. Rub the head and horns gently, and you are all set for exams.

Statue of Cow: Cow is considered the divine servant (messenger) of Michizane, so you can see statues of cow in all the shrines dedicated to him. Nishiki-Tenmangu is one of them. I have seen many statues of cow in the other shrines associated with Michizane, but the one at Nishiki-Tenmangu is the best so far. It is really cute and lifelike. Rub the head and/or horns with your hands gently, and you will be smarter in learning.

Natural Spring Water: There is a well inside the precinct of the shrine. The water which comes up there is well-known as "Nishiki-no-Mizu" (Water of Nishiki). There are some local people who come to the shine to get the water for them to drink at home. Sip the water when you visit the shrine, and you will probably be successful in learning, business, and will be free from bad luck.

Fortune Telling Slip ("Omikuji"): You can get a fortune telling slip drawn from the container set by the marionette (automaton). There are several push buttons in front of it, and you can choose Japanese or English version. As soon as you enter the coin, the marionette begins dancing, and your fortune telling slip comes out from the slot. If the oracle in your slip tells "Excellent Luck" or "Luck", keep it with you in your wallet. If it tells "Unlucky", tie it up to one of the ropes between the two poles prepared in the shrine to get rid of bad luck. When you visit Nishiki-Tenmangu Shrine, make sure to include other places of interest nearby, such as Nishiki Market, Shinkyogoku Shopping Arcade, Teramachi Shopping Arcade, Takoyakushi-do Temple, etc. There are lots to see there and lots of restaurants for lunch / dinner. Probably, you can spend good 1/2 day just hopping around the area.