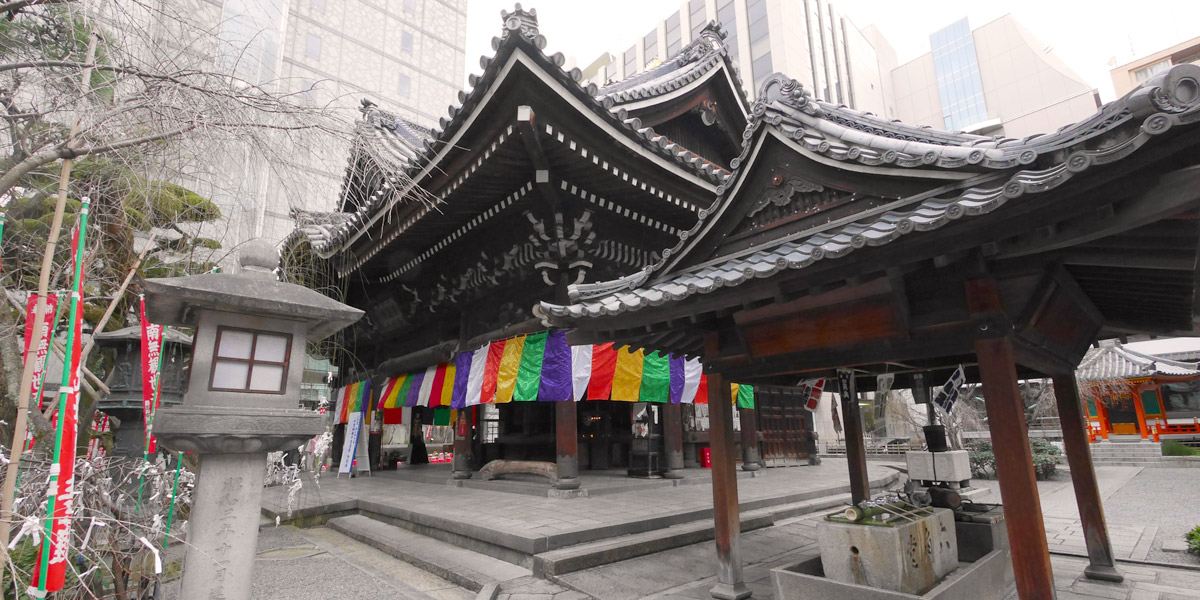 Official name of this temple is "Choho-ji", located in a convenient area close to the famous Nishiki Market, a narrow alley market right in the central shopping district. People call the temple "Rokkaku-do" Hall, because the shape of the tiled roof is hexagonal ("Rokkaku" = hexagon in English). If you want to see the entire roof, take one of the elevators with glass windows in the building right next to the temple (= West 18 Bldg.) and go up to the upper level. You can see the high level view of the roof.

Why is the roof shape hexagonal ? In Buddhism, there is a concept "Rokkon-Shojo", which means "Purification of six roots of perception". One who is successful in getting rid of all carnal desires by purifying six roots of perception (auditory, olfactory, visual, gustatory, tactile and conscious perceptions) can reach the highest nobility of mind. That is when the six perceptions are well-balanced just like a radar chart forming a perfect hexagonal shape. The hexagonal roof shape represents that ultimate state of mind. Rokkaku-do Hall is an independent branch temple of Tendai Buddhist sect. It was founded in 580, before the capital was moved to Heian-kyo (= current Kyoto) in 794. In 587, "Prince Shotoku", a regent and a high-ranked politician of Asuka Period, came to the area where the current Rokkaku-do Hall stands to look for materials to build Shitenno-ji Temple in Osaka. He found a pond there and he bathed in the pond to cleanse himself and to heal the fatigue after his long journey. While bathing, he placed his Nenji-Butsu (pocket size statue of Buddha which was always kept besides him) in a trunk of a tree. After bathing, he grabbed it but found it did not come off. So, he left it as is. Nenji-Butsu appeared in his dream that night and said it would want to stay there awhile to heal sufferings of people in the area. He agreed and decided to build a temple there for his Nenji-Butsu. The temple was named Rokkaku-do Hall and Nenji-Butsu was enshrined in the hall and it is still there as the principal image of worship.

Principal image is a tiny statue of pocket Buddha

BTW, Nenji-Butsu enshrined in the hall is the statue of "Nyoirin Kannon" (= Bodhisattva of Compassion). It is only 5.5 centimeter tall (a little shorter than 2.2 inches). Unfortunately, it is not ordinarily on public display. Prince Shotoku found this small statue drifted ashore. Since he was thinking that he believed in Nyoirin Kannon in his previous life, he decided to keep it with him as his Nenji-Butsu (pocket Buddha).

Birthplace of art of flower arrangment

Small temple, but lots to see

You can see the pond where Prince Shotoku bathed in 587 on the north side of the temple. Swans are peacefully swimming there now - do not feed them because they can bite your fingers.

The other things of interest are; "Heso-Ishi" (Navel Stone) : The location where Rokkaku-do Hall stands has been considered the center of Kyoto. The spot where the hexagonal-shaped navel stone is placed is the very center of Kyoto. Willow tree in the precinct

Willow Tree: Willow tree in Rokkaku-do Hall has a mystical power of match-making. There is an interesting legend. Emperor Saga (786 - 842) visited Rokkaku-do Hall to pray for a happy encounter with someone who would be his future wife. Right after the visit, he got a divine revelation in his dream which said "Go to the willow tree". He visited Rokkaku-do Hall again and walked to the willow tree, following the revelation. To his surprise, a beautiful young lady was standing under the tree, and they fell in love instantly -> they got married. With this legend, the tree is said to have a power of match-making. Those who are waiting for happy encounters buy fortune telling slips at the store in the temple, and if the telling is good, they tie two wands of the Willow tree with the slip. Incense Burning Pot in front of the temple, carried by three small imps.

I love this temple. Not too crowded, and very peaceful with lots of pigeons in the ground. Starbucks is in the adjacent building (West 18 Bldg.) - nice to take a break.

There are not so many temples / shrines around Rokkaku-do Hall, although tons of restaurants and cafes around. If you are interested in "Manga" (Japanese cartoons), International Manga Museum is the place to go before or after your visit to Rokkaku-do Hall. It is located right on the north-west corner of Karasuma Oike intersection. 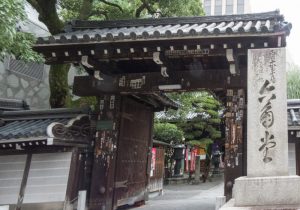 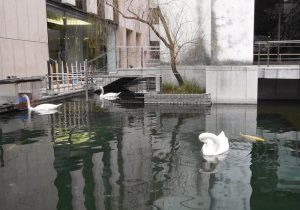 This small pond is where Prince Shotoku bathed 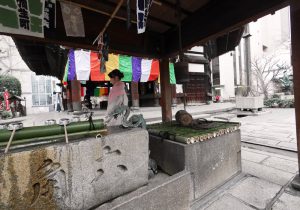 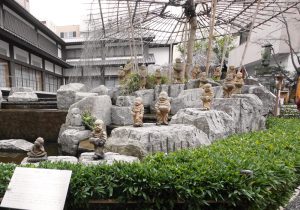 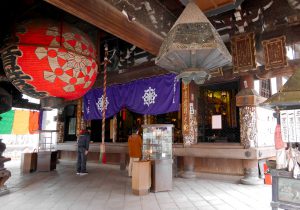 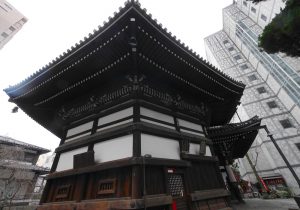 This temple is surrounded by tall buildings