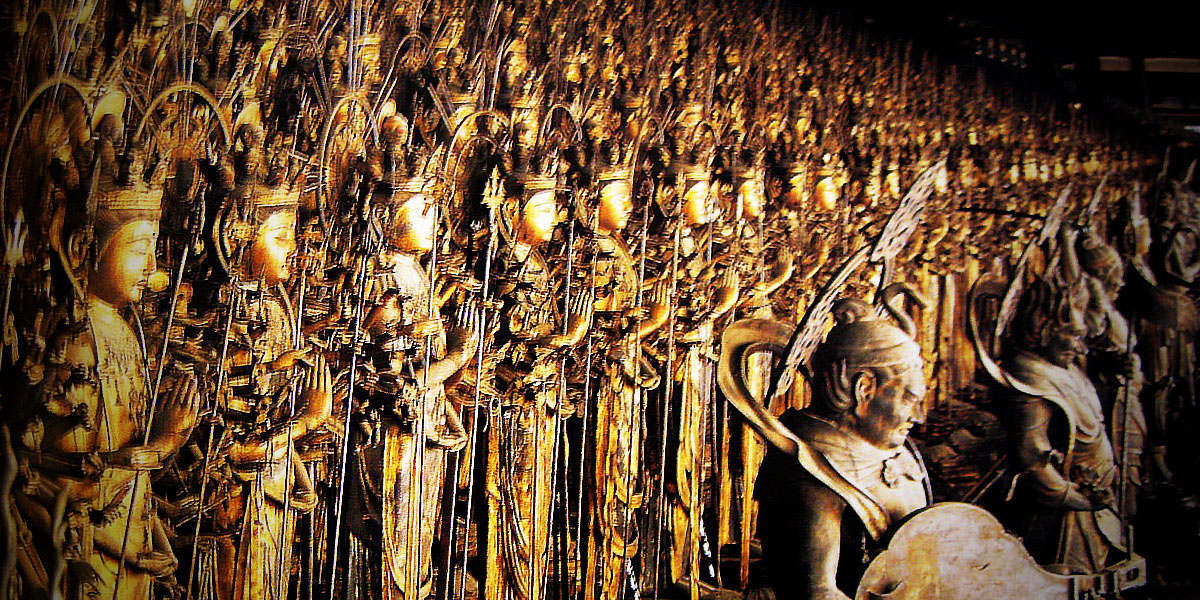 Sanjusangen-do Hall used to be my favorite temple because of its uniqueness. I still like this temple, but I usually stay away from it these days. The problem is that this temple is now one of the most popular sightseeing spots in town, and it is ALWAYS packed with tourists. The other day, I went there with my friends who came from NY and I was so disappointed with the throng of people. I was constantly pushed by several groups of tourists along the long hallway... For those who do not mind being in a crowd of people, this place is worth visiting. I would recommend, though, that you visit there early in the morning (right after they are open - 8:00am) on a weekday in slower season. That way, you can enjoy the tranquil spectacle inside the hall. Sanjusangen-do Hall was originally built in 1165 by the retired Emperor Go-Shirakawa in his detached palace. The temple was called "Renge-Oh-In" at the time and it had five-story pagoda and other associated buildings in the ground. In 1249, all of them were burnt down in a fire. The current Sanjusangen-do Hall is the main hall restored in 1266. It is one of the two oldest wooden buildings in Kyoto still remaining in good shape from Kamakura Period (1185 - 1333). In the hall, what surprises the visitors is the 1000 x standing Senju Kannon, aligned along the hallway and centered by the large sitting Senju Kannon - breathtaking ! 124 out of the set of 1000 Senju Kannon's were the ones saved when the original main hall was burnt down, but the remaining 876 were built in Kamakura Period, it took 16 years to complete them. Wind God - My most favorite statue The open corridor under the west eaves of the hall is used for Japanese archery competition held every year in January, for certified archers celebrating Coming-of-Age Day. Originally, the competition was intended for archers who could shoot arrows from the end of the corridor to the other end (120 meters), but now the distance is half of that (60 meters).

Sanjusangen-do Hall has a miraculous power to heal headaches. Retired Emperor Go-Shirakawa had long been suffered from headaches, and one day he prayed to Yakushi-Nyorai (Buddha of Healing) for recovery. Soon after that, a Buddhist priest appeared in his dream and said he was a monk called "Renge-bo" in his former life. The priest in the dream told him that the skull of Renge-bo was left abandoned deep in a river and a tree grew through the skull, and every time the tree was shaken by the wind he had a sore head. Go-Shirakawa began looking for the skull, and found it in the river bottom. He cleaned the skull and placed it under the sitting Senju Kannon in the main hall of the temple - headache was gone. If you are subject to headaches, I suggest that you visit Sanjusangen-do Hall and pray to the sitting Kannon Bosatsu to get well.

Each standing Senju Kannon resembles the others, but slightly different. It is said you can find one whose face is similar to you, and also similar to someone important for you. 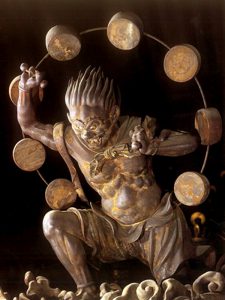 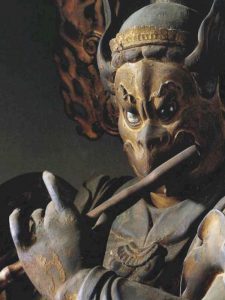 Statue of Garuda - one of the 28 desciples 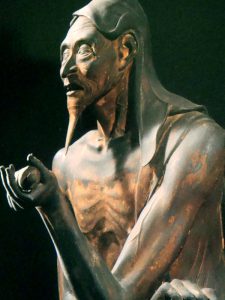 Statue of Basu Sennin - one of the 28 desciples 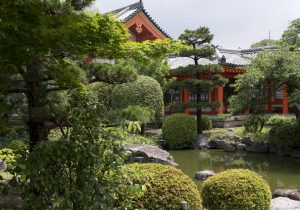 Small, but a beautiful garden in the backyard of the temple