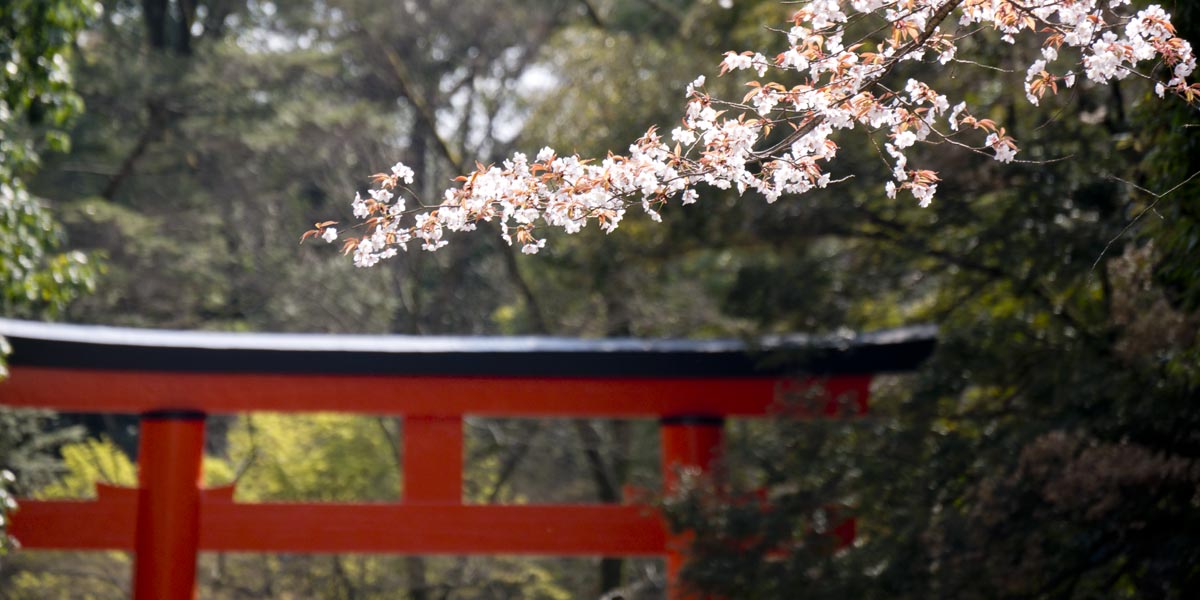 Tower Gate to the Inner Shrine - 0.75 mile from the First Gateway.

One of the Oldest Shrines in Kyoto

Shimogamo Jinja Shrine sits in the delta where Takano River and Kamo River join together (near Keihan Demachiyanagi Station), north of central Kyoto. It is one of the oldest shrines in town, and it was built before Heiankyo (old Kyoto) was established in 794 as the capital of Japan. The path towards the inner shrine from the first Torii gateway is really long (0.75 mile), but it is a lot of fun to walk through. The entire precinct of Shimogamo Jinja Shrine is in a natural forest called "Tadasu-no-Mori" which is a primeval forest and has been there for more than 1200 years. It is beautiful with bright green leaves and Cherry blossoms in spring, and with scarlet Japanese Maple leaves in late autumn. A Sub-Shrine Making You Beautiful

There are many things to see in Shimogamo Jinja Shrine. The first one is Kawai Jinja Shrine which stands on the left hand side near the first Torii gateway. It is one of the sub-shrines of which deity is a female god making desires of women to be more beautiful come true. Lots of young women (and some guys nowadays) visit the shrine and they offer hand-mirror-shaped votive tablets nicely made up with their own cosmetics, wishing for being more beautiful. Another Sub-Shrine, a Powerful Match-Maker

The next place to see is Aioi Jinja Shrine which is also a sub-shrine located right before the second Torii gateway near the inner shrine. This shrine enshrines the powerful match-making deity, so young women (and some guys, too) visit there to wish for their loves to be accomplished.

After getting through the second Torii gateway, we can see the inner shrines. One of them is called Mitarashi Jinja Shrine which sits on top of a well from where a clean natural mineral water comes out to fill the pond there. During Mitarashi Festival held at the end of July, people take off their shoes and walk into the pond. It is believed that cleansing feet with the sacred water brings about healthier and safer lives in the coming year. Of the other inner shrines, two important shrines are West Shrine and East Shrine. West Shrine enshrines a guardian god protecting Kyoto. People usually wish for peace of the town. East Shrine enshrines the guardian god for women, and the benefit of visiting there is said to be easier and safer deliveries of babies. The Main Inner Shrine is not open publicly throughout the year except for occasional event days. Inner shrines, sub-shrines and the forest surrounding the precinct have powerful flows of mystical energies from the northern mountains. It is considered one of the most powerful spiritual areas in Kyoto. Very Popular Place, but not Over-Crowded

Shimogamo Jinja Shrine is a very popular place to visit, and I see a lot of visitors from other parts of Japan and from abroad. Good thing, though, is that it does not get over crowded with visitors except for the special days when annual events are held. Another good thing is that there is a nice Japanese cafe "Saruya" near the second Torii gateway. It is a lot of walk in the precinct, so those who want to take a break stop at the cafe to have a cup of Japanese green tea with a small Japanese sweet.

Shimogamo Shrine is one of the UNESCO World Heritages.