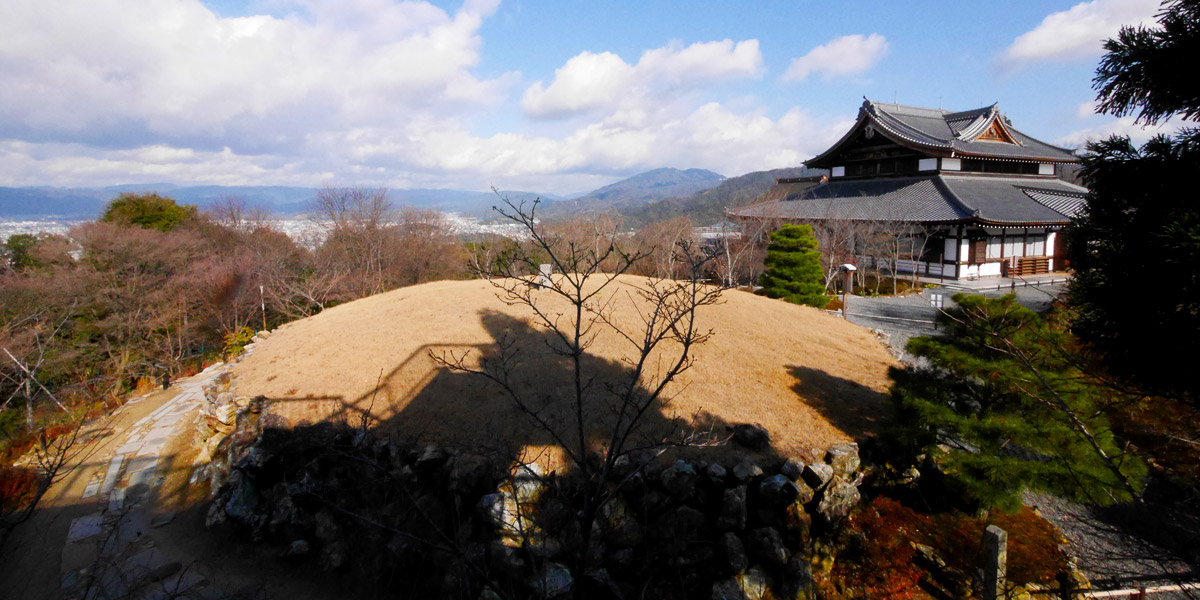 Guardian deity of Kyoto on top of the mountain Mound where a clay Shogun is buried. On the left is West Observation Deck.

Shogun-zuka is a mound where a clay statue of armed Shogun (= military general) is buried. This statue of Shogun is the guardian of Kyoto, watching entire city from top of the mountain. The mound was built in 794, when the capital was moved to Heiankyo (= current Kyoto) from Nagaokakyo. It is a round-shaped mound (66 ft. diameter, 7 ft. height) and we can walk around it - not much to see, though, because Shogun is buried in the mound and we can't see him. In 784, capital was moved to Nagaokakyo from Heijokyo where the involvements of Buddhist priests into politics were increasing. Emperor Kanmu wanted to stay away from influences of such Buddhist priests in order to pursue politics on his own. That was the major reason for the capital relocation to Nagaokakyo, where geographical benefits were also expected over Heijokyo such as more efficient transportation using rivers.

But soon after the capital relocation, Emperor Kanmu found the moving to Nagaokakyo did not work out well. Series of bad things occurred. First of all, Tanetsugu Fujiwara, a key player who was pushing through the capital relocation project, was assassinated. Then a rumor spread that Imperial Prince "Sawara", younger brother of Emperor Kanmu, was involved in plotting the assassination. Prince Sawara was arrested and although he alleged his innocence, he was sentenced to exile. He refused to eat as a protest, and finally he died bearing a deep grudge.

After the death of Prince Sawara, many bad things followed - Empress suddenly passed away followed by the death of Emperor's mother, serious floods attacked the new capital, and an epidemic broke out with famine. Emperor Kanmu thought these were caused by the curse of his brother Prince Sawara, and he decided to move the capital to somewhere else and ended up with Heiankyo (current Kyoto), only 10 years after the capital was moved from Heijokyo to Nagaokakyo.

Emperor Kanmu did not want to experience the same bad things over again in Heiankyo, so he ordered to build a clay statue of armed Shogun as the guardian deity of the new capital.

The best spot to enjoy the view of city of Kyoto Grand Observation Deck. Huge deck from where you can enjoy the spectacular view of city of Kyoto.

The observation deck newly constructed in 2014 near the mound is where everyone is heading to. It is called Grand Observation Deck which is 4.6 times larger than the famous observation deck of Kiyomizu-dera Temple. The view overlooking the city of Kyoto is spectacular !

There is another observation deck (West Deck) adjacent to the mound, but I guess you can skip this deck simply because most of the scenery you can see from there can be seen from the Grand Observation Deck. Also, the West Deck is up on top of the building, and you have to go up steep stairs.

Besides the mound and Grand Observation Deck, there are several other things of interest, which are; Blue God of Fire painted on a hanging scroll. It is exhibited in Seiryu-den Hall.

Seiryu-den Hall (Blue Dragon Hall): Grand Observation Deck is connected to this hall. In the hall, a hanging scroll with a painting of "Ao-Fudo" (Blue Acala, or Blue God of Fire) is exhibited. The one we can see now is the replica, though (the original hanging scroll is displayed in Kyoto National Museum). This Seiryu-den Hall used to stand near Kitano-Tenmangu Shrine in Kamigyo Ward. Originally, it was built in 1915 to celebrate the enthronement of Emperor Taisho, but in 1947 it was granted over to Kyoto prefecture, when it began serving as a Judo (Japanese marshal art) practice arena for policemen. In 1999, however, the hall was disassembled and was reassembled in the current location and Grand Observation Deck was added later on. Japanese garden: There is a beautiful Japanese garden adjacent to the mound. During certain periods in spring and autumn, the whole area is open even in the evening. You can enjoy seeing seasonal flowers and leaves beautifully illuminated after sun goes down. You can see the gorgeous view of city of Kyoto at night from the Grand Observation Deck.

Shogun-zuka mound, Seiryu-den Hall, observation decks and the garden - all belong to and are maintained by Shoren-in Temple located in Higashiyama Ward. That is where the hanging scroll of Ao-Fudo (Blue Acala) used to belong to.

One last note. Getting Shogun-zuka mound is a bit tricky - not many means of transportation (remember, it is on top of a mountain). There is a circulation bus in busy seasons back and forth between the mound and the city area, but it only comes every 1 or 2 hours. My suggestion is that you take a taxi cab from Westin Miyako Hotel in Keage. Here is how...

There are no taxi cabs waiting at Shogun-zuka (unless you are super lucky), call MK Taxi (075-778-4145) when you are ready to go back to town. MK Taxi is one of the highly reliable taxi companies in Kyoto. 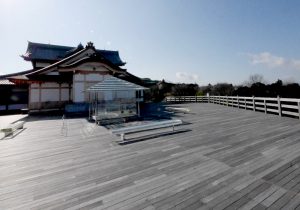 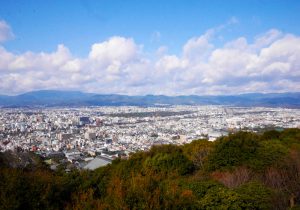 View from the observatory. Really beautiful. 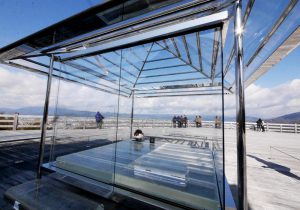 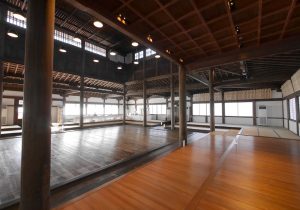 Seiryu-den Hall. It used to be a Judo practice arena. 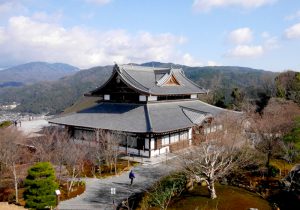