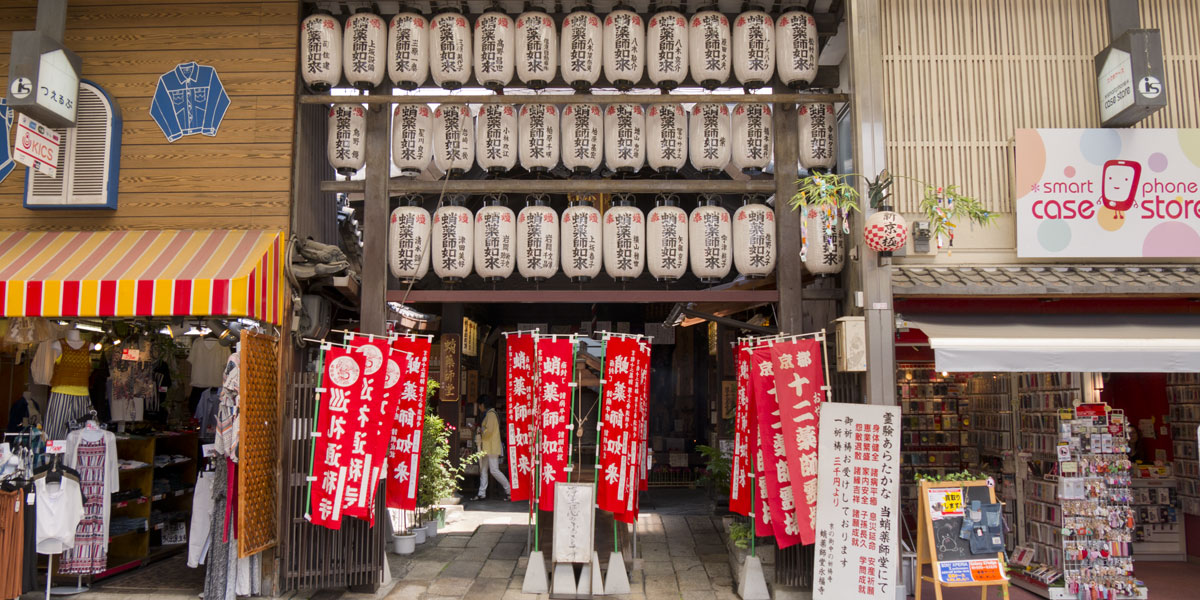 Strong Healing Power in a Tiny Temple in Town Takoyakushi-do is a tiny temple located in Nishi-Kyogoku shopping arcade in the heart of Kyoto. Situated in such a lively area, it receives a lot of visitors from all over the world. Some of the visitors, though, have specific purposes to visit this temple. The temple is renowned for its curative power, and those who are sick or have health concerns visit there wishing for getting well. In fact, two of my friends recovered from the serious conditions. One of them experienced apoplectic stroke which caused her speech defect. But once she visited the temple, her condition got better. Another friend of mine had an acute leukemia and he was told he would not have much time left. But I visited the temple for him (he could not do so by himself because he was in the US), and prayed for his recovery. He did recover ! He took a bone marrow transplant surgery and that made him well. Takoyakushi-do is a very small temple. From the entrance to the main hall is about 30 ft. That's it !

Enshrined in the Temple is Buddha of Healing

Originally, a wealthy person called "Rinshu" worshiped "Yakushi-Nyorai" (a Buddha of Healing) enshrined in the main hall of Enryakuji Temple in Mt. Hiei and paid a visit every month all the way from city of Kyoto. But it became harder and harder for Rinshu to walk up to the mountain as he became older, and he was wondering how to keep worshiping Yakushi-Nyorai without having to visit Enryakuji Temple. One day, he had a dream in that Yakushi-Nyorai appeared and told him a clone of Yakushi-Nyorai is buried in the mountain and urged him to dig it out. He did so and found the clone, a stone statue. He took it back home, and founded a small temple called "Eifukuji" near where he lived and enshrined it in his temple. That was in the year of 1181. Soon after, the temple became popular among the people in town because of the spiritual power to cure all kinds of illness. Nade-Yakushi. People touch it with left hand, and then all the sicknesses are gone.

Here is an interesting legend. In mid Kamakura Period (1249 - 1256), there was a monk named "Zenko" in the temple. He had a mother who was very sick. She liked eating Octopus and asked Zenko to get one for her. Since he was serving the temple as a Buddhist monk, he was not supposed to buy any seafood, but he did so thinking of his mother. On his way back from the fish market, people who saw him getting out of the market with a container were suspicious about what he bought. They chased him and had him open the container. What they saw in the container were 8 rolled scriptures although they expected to see a live octopus. They immediately noticed the octopus transfigured itself to the scriptures. All the sudden, then, the 8 scriptures transformed back to the octopus and jumped into the pond beside them, casting a mysterious light by which the sickness of Zenko's mother was gone. That was when the temple began to be called Takoyakushi-Do (Tako is Octopus, and Yakushi is Buddha of Healing). I am skeptical about the octopus story, but the healing power of Takoyakushi-do exists for sure, according to my experiences.

Rub Octopus and You will Get Well

There is a cute wooden Octopus in the temple and it is called "Nade-Yakushi" (Rubbing Octopus). Whenever I visit Takoyakushi-do, I gently rub it with my left hand, wishing for being better. We are not supposed to touch it with right hand.

Near Takoyakushi-do, there are Takoyaki (Fried Octopus Balls) stands around. Pray at Takoyakushi-do first, and then rub Nade-Yakushi, followed by a quick bite of Takoyaki at one of the those stands - you will feel great !