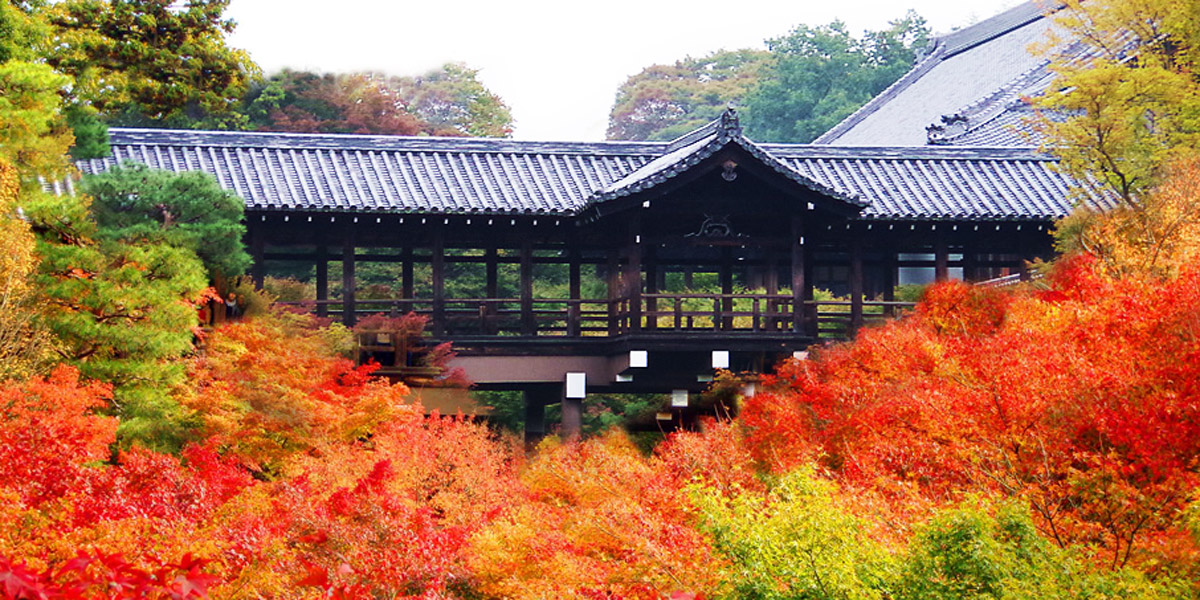 One of the top beauty spots for autumn leaves in Kyoto I love this temple ! It is located south-east of Kyoto - not quite a fancy area like central Kyoto but has a more classical taste. The temple has a huge ground with lots of historical wooden buildings, gardens, beautiful bridge corridors over the valley and thousands of Maple trees of which leaves turn scarlet in autumn. This temple is usually quiet, much quieter than the highly popular places like Kiyomizu-dera Temple, but when it comes to late autumn, this place is PACKED with visitors from all over Japan and from abroad - "Tsuuten-kyo" Bridge over the valley is one of the best spots in Kyoto for viewing autumn Maples. If it is late autumn when you are in Kyoto, I suggest that you go there very early in the morning, right before the gates are open at 9:00am.

Tofuku-ji is the head temple for Tofuku-ji school of Rinzai Zen Buddhist sect. Founder of Tofuku-ji, "En-nin", was an apprentice of "Yousai" who founded Kennin-ji Temple (Gion District), and he studied Zen Buddhism in Southern China as Yousai did. En-nin brought back tea seeds from China (like what Yousai did), and popularized tea cultivation in Japan together with Yousai. Some of the Maple trees in the temple are also from Southern China - leaves are three-pointed unlike regular Japanese Maple which has five-pointed leaves. Also, En-nin introduced flour milling and noodle making processes that he learned in China.

Tofuku-ji Temple was named after two major temples in Nara

The temple was built in 1255 by order of Michiie Kujou (regent) to commemorate soul of his uncle, Kanezane Kujou. The construction started in 1236, so it took 19 years to complete the temple ! Regent Michiie wanted to build an upscale temple comparable to two major temples in Nara - Todai-ji Temple and Kofuku-ji Temple. He took "To" (= East) from the name of Todai-ji Temple and "Fuku" (= Happiness) from Kofuku-ji Temple, and thus the name of his temple became "To+Fuku"-ji.

Most of the buildings of Tofuku-ji Temple were burnt down by series of fires (1319, 1334 and 1336). Right after the fire in 1336, restoration project was launched and the re-construction of the buildings was completed in 1346. Unfortunately, though, there was again a fire in 1881 by which main buildings including Buddha Hall, Lecture Hall and Hojo Hall (priest's living quarter) were destroyed. So, the ones we see now were restored in Meiji Period (1868 - 1912).

Things to see in Tofuku-ji Temple Zen Hall: This is the largest Zen hall in Japan (Important Cultural Property). 138ft from south to north and 72ft from east to west. As many as 400 Buddhist monks used to practice Zen meditation at a time in this hall. It was once destroyed by fire and restored in 1347. Latrine - I guess some monks would feel nervous...

"To-su" Latrine: This is the oldest public latrine in Japan, built in Muromachi Period (1336 - 1573). In Zen Buddhism, excretion was a part of the daily practice. Everyone was supposed to follow the specific manners in the latrine. No conversation was allowed there. If I were one of those monks, I would be extremely nervous because there are no partitions between the toilets (just holes), and not much space in between. Bath Room: It was built in 1459 - the second oldest bath room (the oldest is the one of Todai-ji Temple in Nara). The bath room does not have any bathtubs. It is a steam bath with chambers just like Sauna bath. Bridges: There are 3 bridges over the valley in Tofuku-ji Temple. The most popular bridge is Tsuten-kyo Bridge (wooden bridge corridor). It was destroyed by typhoon in 1959 and restored in 1961. Admission = Yen 400. In late autumn, there are tons of leaf peepers lingering in center of this bridge. This bridge takes us to Kaizan-do Hall (the hall where the statue of En-nin, the founder, is enshrined). Kaizan-do Hall has a beautiful dry landscape garden. Engetsu-kyo Bridge is the 2nd popular bridge (Important Cultural Property) restored in 1603, and is one of the top 100 bridges in Japan. The 3rd bridge is Gaun-kyo Bridge which is located west-end of the temple. It also serves as a community bridge for those who live nearby. Both Engetsu-kyo and Gaun-kyo Bridges are much less crowded even in the peak season (late autumn) than the main bridge Tsuten-kyo Bridge. So, when you visit there in autumn, I suggest that you pick one of those two bridges to see the autumn leaves. Between Nov 12 and Nov 30, no photography is allowed on the bridges for safety reason. All these bridges were originally intended for relieving tough duty of monks going back and forth the valley.

When you visit Tofuku-ji Temple, I strongly recommend that you also visit Sennyu-ji Temple which is located just half a mile away (it has a huge precinct, too). And from Sennyu-ji Temple, you can stretch your journey to Chishaku-in Temple (about 1.5 miles away). After Chishaku-in Temple, you can walk to Sanjusangen-do Hall and/or to Kyoto National Museum. It is a really nice one-day tour. 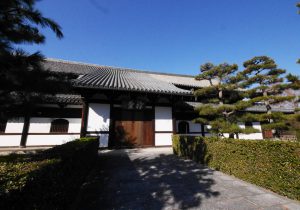 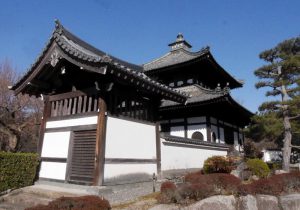 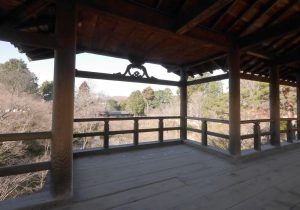 View from the observation deck of "Tsuten-kyo" bridge corridor. Beautiful in autumn. 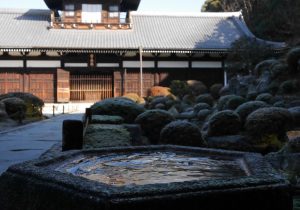 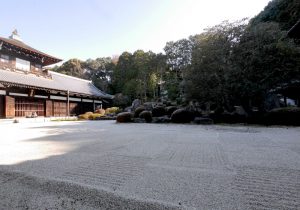 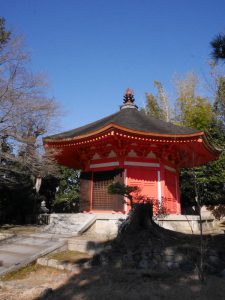 "Aizen-do" Hall located on the north side of the precinct 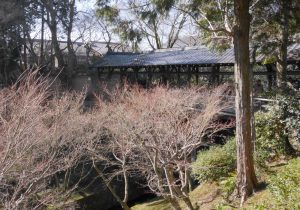 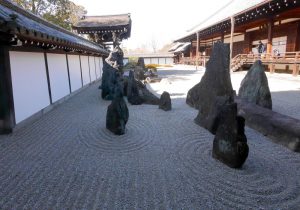 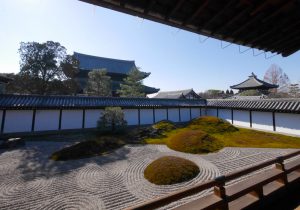 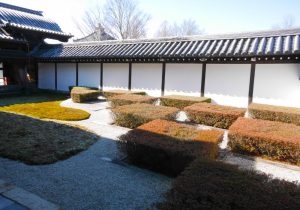 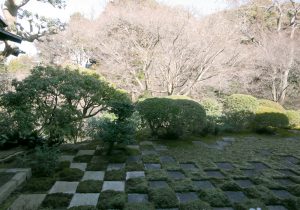 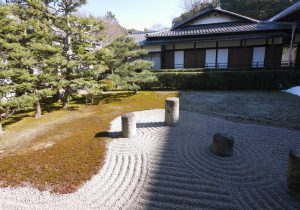