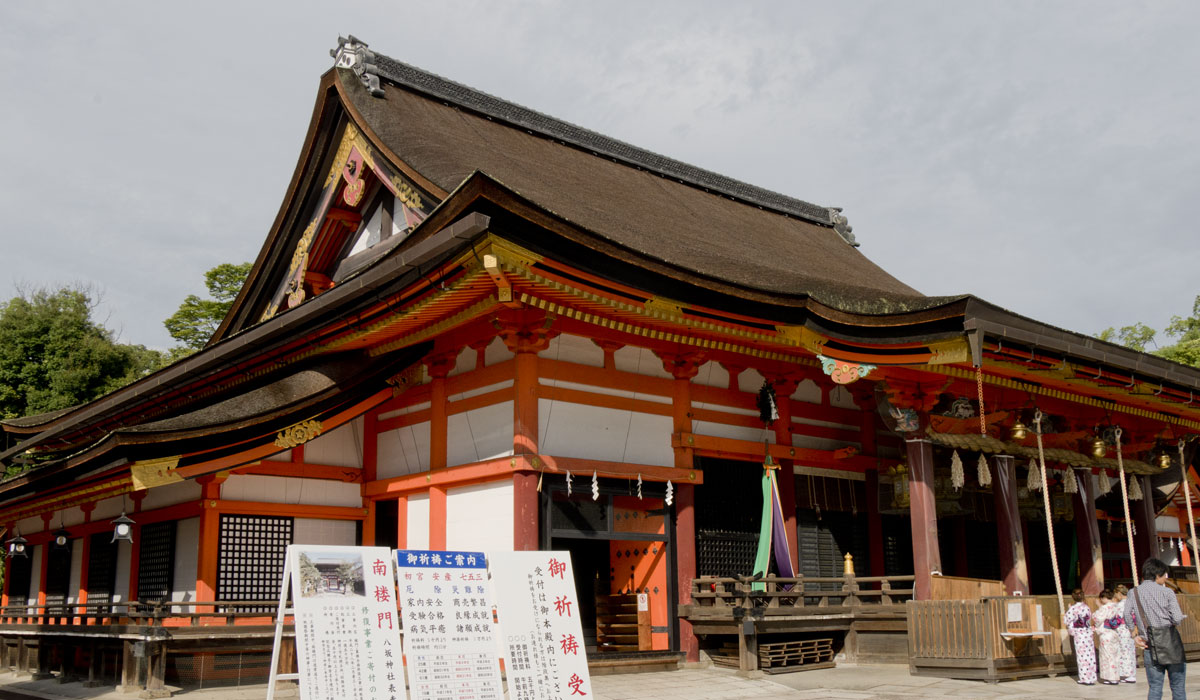 Standing in the Most Popular Area in Kyoto

Yasaka Shrine is one of the most popular sightseeing spots in Kyoto. It is always packed with locals and out-of-town visitors. There are several reasons why this spot is so popular. First, it is located in the busiest area in Kyoto, called Gion district, well-known for Geisha Girls (traditional Japanese female entertainers wearing Kimono). Second, it is adjacent to Maruyama Park which is really beautiful throughout the year, especially in April when Cherry trees in the park are in full bloom. Third, there are lots of must-visit sightseeing spots nearby, including Kodai-ji Temple, Kiyomizu-dera Temple, Nene-no-Michi Path, Ishibei Koji Lane, etc. Also, there are a lot of top restaurants in the area. The best time to visit there is either very early in the morning or late in the evening - it is open for public 24 hours and accessible from 4 entrance gates (east, west, south and north). Headquarters of 3,000 Shrines of the Same Name

Yasaka Jinja Shrine was originally founded in 656 as the guardian deity for local people, when it was called "Gion-sha" (renamed to Yasaka Shrine in 1868). Main deity of the shrine is legendary hero "Susano-no-Mikoto" who beat "Yamata-no-Orochi", an evil eight-headed giant snake. One of the senior priests told me "That's why this shrine has a strong miraculous power". In fact, Yasaka Jinja Shrine has long been worshiped by many of the local people as the headquarters of as many as 3,000 branch shrines with the same name (= Yasaka Jinja Shrine) throughout Japan. People approaching to the central square of the shrine, where the main hall and outdoor stage, and some branch shrines stand

In 863, there was a nation-wide outbreak of plague and many lives were lost. People thought it was caused by the curse of those who died of various diseases. In order to console the souls of the dead, people built 66 ritual floats in the imperial garden ("Shinsen-en") and prayed to the god, according to the imperial order. At that time, Yasaka Jinja Shrine sent portable shrines to the garden, by which the power of Susano-no-Mikoto was delivered to help expel the epidemic. That is the origin of Gion Festival, one of the biggest festivals in Japan, and Yasaka Jinja Shrine has been the main sponsor of the festival since then. So, Yasaka Jinja Shrine has been believed to have a power to get people sound health.

One of the Five Major Shrines Guarding Kyoto

Yasaka Jinja Shrine is one of the 5 major shrines guarding Kyoto and it guards the city of Kyoto from the east (from the north = Kamigamo Shrine, from the south = Jonangu Shrine, from the west = Matsuo-taisha Shrine, in the center = Heian-jingu Shrine). "Daikokuten" (god of wealth) is enshrined there, and the shrine is very popular among those who are looking for happy encounters. Votive tablets (heart-shaped !) with wishes are dedicated by the visitors. Three goddesses are enshrined. All of them are said to be beautiful and so many of young women visit there praying for being beautiful with the power of the three female gods. Sacred spring water comes out in the shrine, and people who visit there put the water on their faces - the water is called "Beauty Water".

Savage soul of Susano-no-Mikoto is enshrined. The shrine is believed to have a power to fulfill all the wishes people may have. God Ebisu enshrined in this shrine is said to be a grandson of Susano-no-Mikoto. He is the god of wealth. Many of the merchants and businessmen visit there to pray for their successful businesses.

It is the first sub-shrine we can see when entering into the precinct from the west tower gate which faces Gion district. Enshrined there is "Somin-shorai", a deity who guards people from epidemic plagues. Whenever I travel abroad, I visit this shrine before departure to pray for my safety. 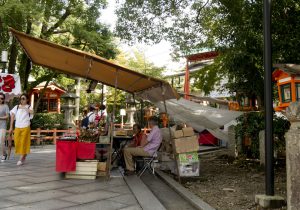 Street Stalls in the shrine precinct 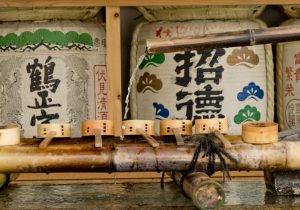 Purification Fountain, called "Chozusha", to rinse hands and mouth before facing the shrines 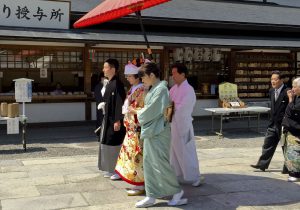 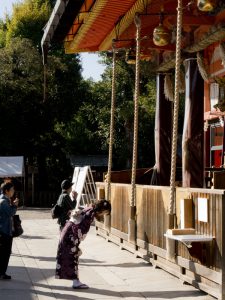 People visit Main Hall and pray to the god for family safety, getting well, etc. 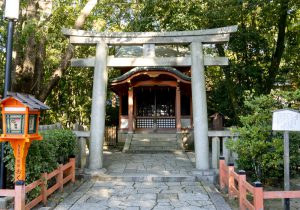 Eki Shrine, a sub-shrine standing right near the West Tower Gate. Eki Shrine is for getting rid of epidemic. 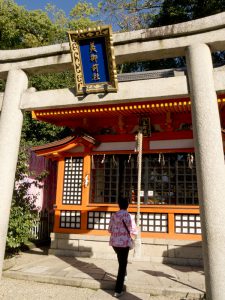 Utsukushigozen-sha Shrine (sub-shrine) located north of the Main Hall. Spring water coming out from the ground here is said to make women beautiful - so many young ladies come here to rinse their faces with the spring water. 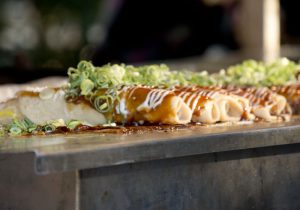