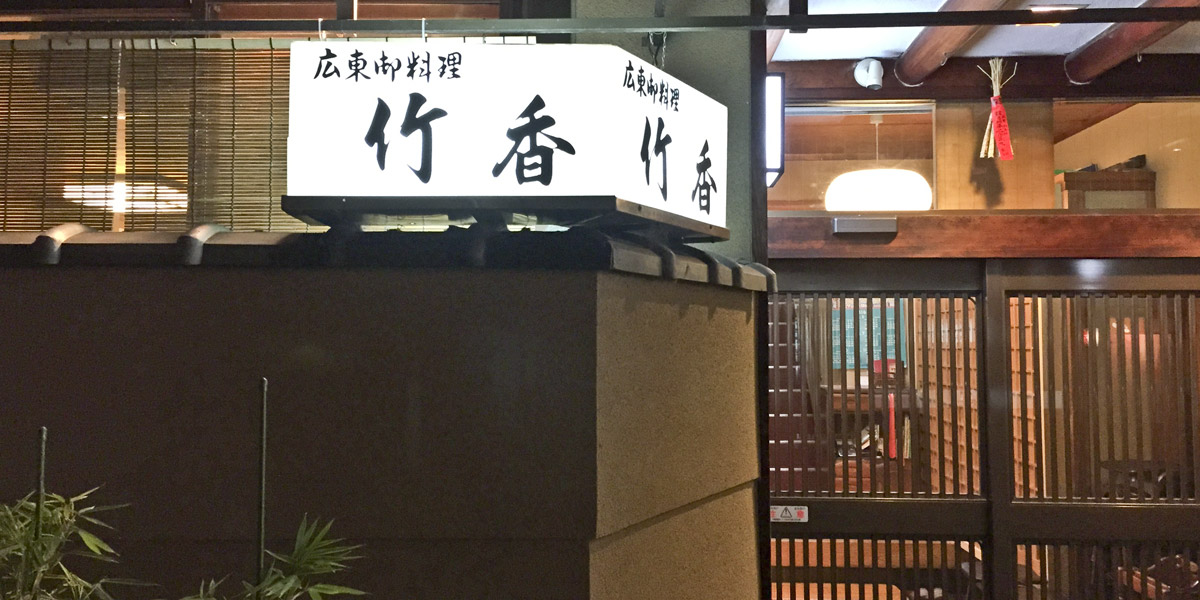 Kyoto-Style Chinese Cuisine in the heart of Gion District This is one of my most favorite restaurants in Kyoto. It stands in the heart of Gion area - right by Gion Shinbashi bridge over Shirakawa river. The area is really beautiful, leaving townscape from more than 300 years with "Machiya" old Japanese houses and stone paved roads. It is a highly touristic spot, especially in late spring time when Cherry blossoms along the riverbank are in full bloom. Takeka serves "Kyoto Style" Chinese foods which are a bit different from authentic Chinese foods. They are lighter and less greasy. Kyoto used to be (and still be) a town of household-based handicraft industries - Kimono fabrics, Japanese papers, etc. Factory spaces were usually adjacent to the living quarters, so people working/living there did not want to bring in strong smelling foods to avoid absorption of smells by the handicraft materials. Also, strong smelling / heavily seasoned foods were not received well by Geisha girls just because they did not want their patrons to notice what they ate before showing up from the smells of their Kimono's and their breaths. That is the background why Kyoto Style Chinese foods are subtle in flavor and taste lighter, having been tweaked over time to meet the local needs. Nowadays, however, there are only a handful Chinese restaurants which still serve Kyoto Style Chinese foods. I am glad Takeka is one of them. When I visited Takeka for the first time several years ago, I ate a lot because the foods were so good. Later, I was concerned I ate too much, but I did not feel so bad, thanks to how the foods were prepared. Every dish was simple and seasoned lightly, using minimal seasonings to get the original tastes of ingredients stand out, instead of layering various seasonings and ingredients to generate sophisticated tastes. Since then, Takeka has been my most favorite Chinese restaurant in town. Good news is that Takeka is a very affordable restaurant even though it is located right in Gion area known for expensive restaurants. A-la-carte menu is available only in the first floor (that is where I usually eat). Second floor offers prix-fixe menus only (staring from Yen 4,000 per person). They take reservations for the guests dining in the second floor, but no reservations are taken for those who are dining in the first floor. The restaurant can be crowded at the weekend, so I suggest that you go there early (before 6:00pm).

Around Takeka is a Beautiful Sightseeing Spot The area where Takeka stands is probably one of the best photogenic spots in Kyoto. Everything there looks really authentic and old - Machiya houses, little river, little bridges, old Willow trees, Cherry trees... all integrated in a small area surrounded by stone-paved roads. You can feel like you are taken back in time. BTW, there is a small shrine at the corner near Gion Shinbashi bridge, called Tatsumi Jinja Shrine. It is a popular shrine among Geisha girls who work in Gion area. They often visit the shrine to pray for their success in their performances. It takes about 20 - 30 min. to look around the area. Take a walk there before dinner at Takeka.

Takeka is a Non-Smoking restaurant, but smoking is allowed in the second floor. 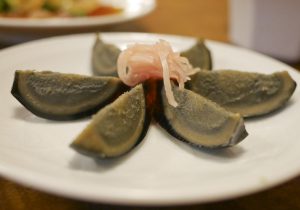 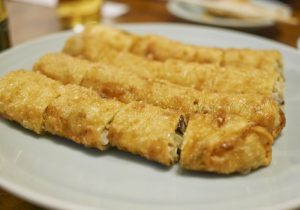 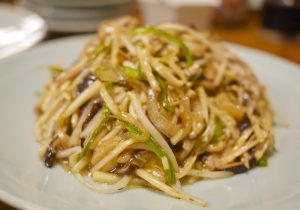 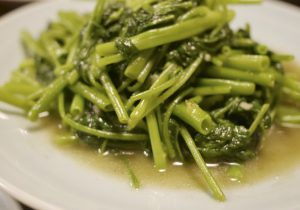 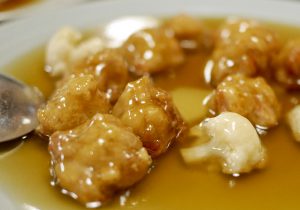 Fried noodles with pork and seasonal vegetables. This is my favorite. 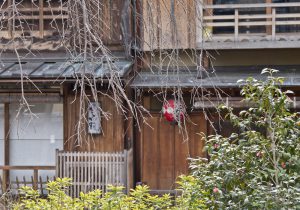 Machiya old houses along the river. Many of them are restaurants now. 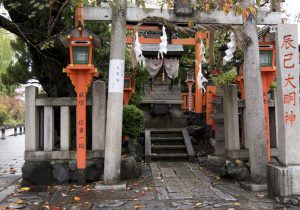 Tatsumi Jinja Shrine. Very small shrine, but there are lots of people visiting there.